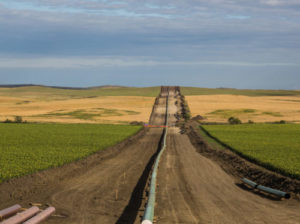 The U.S. government’s “unprecedented” decision to intervene in a judge’s decision on the controversial Dakota Access pipeline “may forever change the way all energy infrastructure projects are reviewed in the future,” and the extent to which Native Americans can influence project decisions, the Associated Press reported earlier this week.

Indian law specialist and former U.S. attorney Troy Eid called the decision a “significant setback” for project proponents Energy Transfer Partners. “Tribes want to be able to influence the outcome in a substantive way,” he said, and the lack of consultation on Dakota Access was “a textbook example of how not to do a project.”

Analysts said the precedent will make future projects more difficult and costly for developers to complete.

The Obama administration’s involvement has “changed the lay of the land forever” for infrastructure projects, said industry consultant Brigham McCown, a former acting administrator of George W. Bush’s Pipeline and Hazardous Materials Safety Administration. “This could bog down or delay every single infrastructure project moving forward,” he told AP. “I don’t think they even realize the can of worms they’ve opened.”

“There is no question it will be much more difficult and costly for these projects to move forward in the future,” agreed Omaha lawyer Brian Jorde. He added that the project “likely will move forward—not that I believe it should move forward—but all the pieces are in place for it to go forward.” In the end, “there is too much money involved and too much influence in Washington to just give up.” (h/t to Midwest Energy News for pointing us to this story)