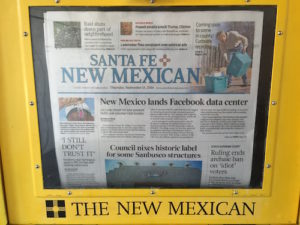 Access to solar-generated electricity may have been a deciding factor this week in Facebook’s decision to locate a new data centre in New Mexico, rather than Utah. The story was front page news yesterday in the state capital, Santa Fe (and your correspondent, as it happened, was on the scene).

The village of Los Lunas, outside Albuquerque, won the bidding war for the new facility “after a topsy-turvy contest between Utah and New Mexico to attract the social media giant,” the New Mexican reports. “The company said it expects to break ground on the sprawling facility, which will be entirely solar powered, within the year.”

Regina Wheeler, CEO of Positive Energy Solar, called the win “a total game-changer for solar in New Mexico.” While solar has faced “huge hurdles” in the state, “it seems like the administration is acknowledging that solar power is important in attracting big…businesses to New Mexico.”

Gov. Susanna Martinez attributed the deal to New Mexico’s business-friendly environment. To land the US$250-million project, Los Lunas agreed to forego 30 years of property taxes in exchange for annual payments of $50,000 to $500,000 from Facebook.

The New Mexican reports that Facebook’s announcement “drew wide praise from New Mexico officials and offered welcome relief in a state that has been dogged by stuttering job growth, high unemployment, and gaping budget deficits.”

Both Utah and New Mexico had concerns about the data centre’s prodigious water consumption, but Sierra Club’s Mona Blaber noted that renewable energy tends to consume less water than conventional industries. “We must ask these questions whenever we look at development and take into account whether the benefits of the development are worth the water consumption,” she said.

The Los Lunas data centre could use up to 1.4 million gallons of water per day if it expands to full capacity, and a similar facility run by Intel consumes 2.5 million gallons. By contrast, the 1,848-MW, coal-fired San Juan Generating Station, which supplies about one-third of the state’s power, guzzles up seven billion gallons per year, twice the consumption of the city of Santa Fe.