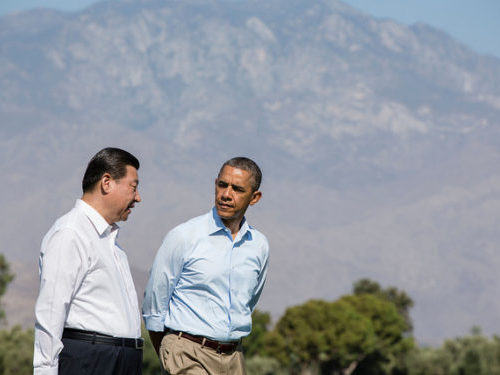 China and the United States jointly ratified the Paris Agreement Saturday, the day before the G20 meeting in Hangzhou, adding the momentum of the world’s two biggest carbon polluters to the push to bring the agreement into force by the end of this year.

“We’re leading by example,” said U.S. President Barack Obama. “As the world’s two largest economies and two largest emitters, our entrance into this agreement continues the momentum of Paris, and should give the rest of the world confidence—whether developed or developing countries—that a low-carbon future is where the world is heading.”

“Just as I believe the Paris agreement will ultimately prove to be a turning point for our planet, I believe that history will judge today’s efforts as pivotal,” he added.

“I have said many times that green mountains and clear water are as good as mountains of gold and silver. To protect the environment is to protect productivity, and to improve the environment is to boost productivity,” said China President Xi Jinping. “We will unwaveringly pursue sustainable development and stay committed to green, low-carbon, and circular development, and to China’s fundamental policy of conserving resources and protecting the environment. In promoting green development, we also aim to address climate change and over-capacity.”

InsideClimate News reports that China has made climate change and green finance high priorities for this year’s G20 summit. “The G20 includes nations at various stages of development, with many competing agendas,” ICN notes. “The U.S.-China event was timed to exert maximum pressure on the wider group.”

The China-U.S. announcement “represents important progress—but also highlights where continued leadership will be critical,” said Nathanial Keohane, vice president, global climate at the U.S. Environmental Defense Fund, in a statement that connected the Paris commitments to the gigatonnes of additional emissions nations could prevent with a more robust plan of action at the International Civil Aviation Organization (ICAO) triennial assembly in Montreal later this month.

“Civil aviation is one of the world’s fastest-growing sources of carbon pollution,” Keohane noted. “A market-based measure to cap aviation emissions from 2020 could prevent eight billion tons of emissions in the first two decades alone—but only if the agreement covers a sufficient share of the growth in global emissions.”

In Hangzhou, meanwhile, India called for greater flexibility in deciding whether to ratify the Paris Agreement this year, while Canada indicated some provincial premiers are just not ready for the federal government to ratify. “Our commitment to ratifying the deal early was made, and is continuing to be a hot item on the agenda for us,” Prime Minister Justin Trudeau told media.

“Earlier this year, sources told the Globe and Mail the Trudeau government wanted to reach a deal within six months of the March meeting,” when Trudeau and provincial/territorial premiers gathered in Vancouver, writes correspondent Nathan Vanderklippe. “But Mr. Trudeau has encountered resistance from places like Saskatchewan, whose premier Brad Wall has threatened to take Ottawa to court if it imposes a carbon price on provincial utilities. Territorial leaders have also said their constituents already pay too high a cost for energy, and cannot bear any increases.”