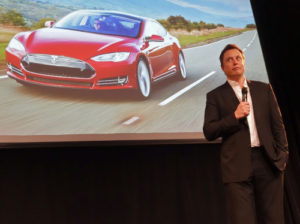 Tesla Motors founder and CEO Elon Musk may not be thinking primarily about range anxiety or super-fast acceleration when he plans the next generation of his vaunted electric car battery.

When Musk first teased a major reveal about Tesla’s new Model S vehicle, Kaufman says journalists were disappointed that it only had to do with a battery that could cover 315 miles on a charge, hit a maximum speed of 155 miles per hour, and accelerate from 0 to 60 miles per hour in 2.5 seconds.

Some reporters tried to amp up the story, with Gawker Media’s Matt Hardigree tweeting that “the Tesla Model S P100D is now faster in a straight line than it would be if you dropped it out of a plane.” But “as physicist Chad Orzel pointed it,” Kaufman writes, “it’s highly unlikely that the Tesla Model S can now accelerate faster than gravity. Even if it did, the acquisition of further bragging rights isn’t likely to change the world, so there was a general feeling of disappointment among those tasked to cover Musk’s every move.”

But Kaufman has a different idea. “The real benefit of Musk’s hardier, more powerful battery isn’t actually intended for his automobile line so much as his latest investment in solar energy producer and storage facility, SolarCity,” he surmises. “Creating more powerful batteries for Tesla today will provide SolarCity with more storage capability for its facilities in the future.”

He cites a Fortune reporter’s observation that “almost a third of electric car batteries are expected be reused by 2025, providing important applications for the power grid and buildings.”