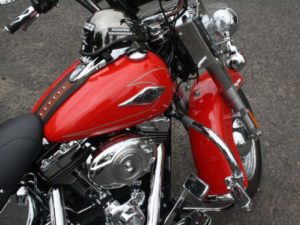 “From 2008 to 2015, Harley-Davidson sold a device called a Screamin’ Eagle engine tuner (available in regular and pro variety), which allowed anyone to hack into their Hog’s emissions control software and dial it back to the simpler times of the 1950’s,” writes Grist’s Heather Smith. That was when “the kids were all excited about a hot new dance craze called the Twist, and America’s major cities were blanketed in a thick gray haze of Beijing-level air pollution.”

Harley was “busted” not long after the EPA began investigating automotive defeat devices in the wake of the Volkswagen emissions scandal, Smith explains. Harley agreed to stop making the engine tuners, buy back and destroy any units still available for sale, and invest $3 million in an air pollution reduction project to be named later.