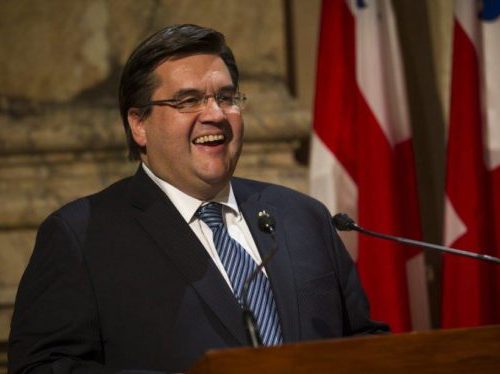 Montreal Mayor Denis Coderre is calling on the National Energy Board to suspend its hearings on TransCanada Corporation’s controversial Energy East pipeline, following revelations by the National Observer that panel members met privately with ex-Quebec premier Jean Charest and other interveners in the process.

“I demand the suspension of hearings held by the National Energy Board on the Energy East file,” Coderre tweeted late Thursday afternoon. “I’m not certain of the impartiality of the process,” he told media earlier in the day, speaking in his capacity as chair of the Montreal Metropolitan Community, which went public with its opposition to Energy East in January.

Earlier in the week, after lawyers representing environmental groups from Quebec and Ontario called for two panelists to recuse themselves from the hearings, the NEB announced it would accept written submissions until September 7, but no verbal testimony, on the alleged conflicts of interest. “The Board has determined that it will establish a written process to consider these motions,” wrote NEB Secretary Sheri Young. “The Board will consider those submissions and establish any further steps after that date.”

Manitoba Wildlands Director Gaile Whelan Enns said Young’s letter was a symptom of larger problems with the NEB’s process. “Generally speaking, the NEB doesn’t allow much talking out loud,” she told Observer Managing Editor Mike De Souza. “The concern is this is a paper process. There’s no ability to speak to these motions, and that increases my concerns about the oral traditional evidence and whether Indigenous intervenors are going to get their hearing.”

“If there are troubling facts, instead of saying ‘send us this in writing and we’ll see what we can do later on,’ they should be saying ‘let’s take a break,’” said the Montreal mayor and former federal Cabinet minister.

(Kudos to De Souza for getting this story into [virtual] print less than four hours after Coderre’s 5:17 PM tweet.)