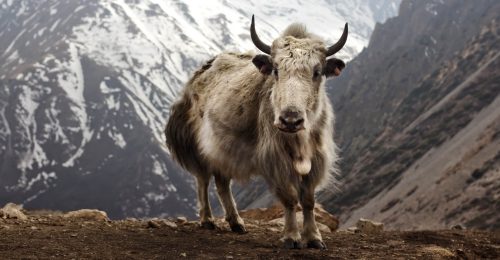 India and China have good reason to cut their greenhouse emissions, scientists say: soot they are producing is damaging their own water resources.

LONDON, 25 August, 2016 – Black carbon – soot particles that absorb sunlight, spread by fossil fuel combustion  – are thought to accelerate the thinning of the glaciers of Himalaya and Tibet. Scientists have just identified the source of this Asian carbon.

The smears that warm the ice in the Himalayas come from India, they say. And two thirds of the black cloud that settles on the frozen rivers of Tibet is from China.

Since billions of people in the region depend on the steady flow of glacial meltwater down the Indus, the Ganges, the Tsangpo-Brahmaputra, the Mekong, the Yangtze and many other rivers through the summer growing season, the implications are ominous.

But since India and China are two of the three countries that burn fossil fuels to emit the highest levels of climate-warming carbon dioxide, the research also delivers another goad to action.

Pristine snow and ice reflect solar radiation back into space: mountain snows with a high albedo provide their own insulation, and release meltwater slowly throughout the season.

Shichang Kang of the Cold and Arid Regions Environmental and Engineering Research Institute of the Chinese Academy of Sciences, based in Lanzhou, reports in the journal Nature Communications that he and colleagues from China and Sweden focused on identifying the source of carbon particles collected from eight snowpits.

These were on glaciers at what the scientists call the Third Pole – the Himalaya-Hindu Kush mountains and the Tibetan Plateau represent the greatest mass of ice on Earth beyond the Arctic and Antarctic – during May and June over the years 2012 to 2014.

They also collected aerosols – particles of black carbon drifting across the region – at seven stations along the Mustang and Langtang valleys in the massif.

Then they used a technique called dual-carbon isotope fingerprinting to identify a chemical signature to distinguish whether the soot came from burning vegetation or fossil fuels, and where the samples came from.

Two-thirds of the soot from the Tibetan plateau, they report, came from fossil fuel combustion in China, and much of the remainder from cinders of yak dung, a traditional fuel in Tibet.

The particles sampled from the Himalayas were, they write, equally composed of fragments of burning biomass and fossil fuels from the Indo-Gangetic Plain in North India. So Asian carbon could be storing up problems for a thirsty (and therefore hungry) future.

Black carbon aerosols, the authors report, “are believed to play a considerable role in the melting of mid-latitude glaciers.” And they conclude that their observations could help “guide policy actions aimed to effectively mitigate emissions.” – Climate News Network