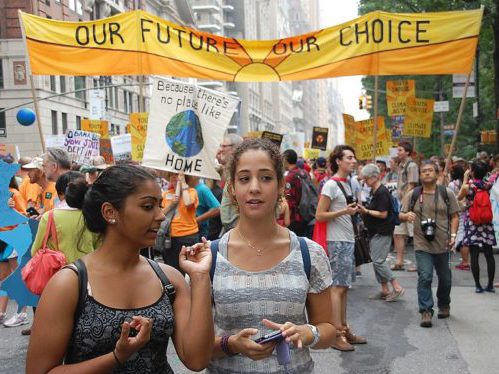 Citing research originally conducted at California’s Stanford University and University of California, Berkeley, a U.S. environmental advocacy group says today’s 21-year-olds stand to lose a lifetime average of US$126,000 in wages and $187,000 in savings to the economic effects of climate change.

“As an entire generation, U.S. millennials—all 175.4 million of them—could lose nearly $8.8 trillion in lifetime income without climate action,” Mashable reports, citing information released by NextGen Climate. For Americans between the ages of 18 and 34 in 2015, “global warming may very well be the biggest threat over the lifetime of a single generation,” said Tom Steyer, the group’s billionaire founder, in a call to reporters announcing the figures.

“This is the first time that losses have been applied at the individual level and to generations that will bear the brunt of our actions or inactions,” said Heather McGee, described by Mashable as “a self-identified millennial and president of Demos, a left-leaning research and advocacy group,” who also spoke on the call.

“The millennial generation and our children are the ones who will face both the crisis and potentially the opportunity to be part of transforming our economy and our society,” she added.

NextGen is a non-profit environmental advocacy organization funded by a U.S. super-PAC (political action committee) of the same name that gave $74 million to Democratic Senate and gubernatorial candidates in 2014 races, according to Mashable.