Chile Sets Latest Cheap Solar Record, at Half the Price of Coal 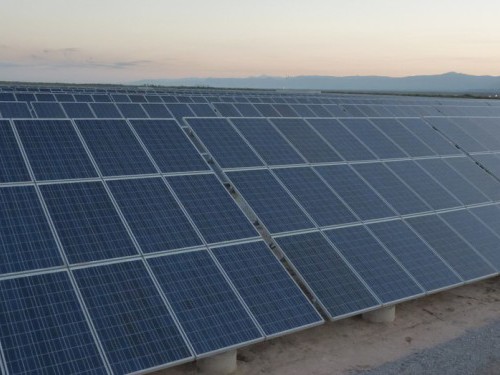 The price of utility-scale solar continued its plunge as Chile became the latest record-holder for cheap power from the sun, signing a contract for delivery of electricity at a price of US$29.10 per megawatt-hour (2.91¢ per kilowatt-hour).

That price shaves 80 cents off the previous record of $29.90 per MWh, set in May in Dubai.

The power sale is “the cheapest to date for any kind of renewable energy,” Bloomberg reports, “and was almost half the price of coal power sold in the same event.”

Maria Elena Solar SA, a subsidiary of Spain’s Solarpack Corp. Tecnologica, will build a 120-MW photovoltaic array in the clear, dry conditions of Chile’s Atacama desert. It will deliver up to 280 GWh annually beginning in 2021.

“A key part of the low price is the ever-declining price for solar panels,” Bloomberg notes. “The average price on the spot market declined this week to 44.7 cents a watt for standard polysilicon panels, a record low.”

Other bids on the Chilean call for more than 12 GWh of electricity underscored renewables’ absolute price advantage, as more than half the contracts awarded went to non-fossil sources. “The lowest price for wind power awarded in the auction was $38.10 a megawatt-hour, power from natural gas-fired plants sold for $47, coal came in at $57, hydroelectricity at $60, and geothermal at $66.”