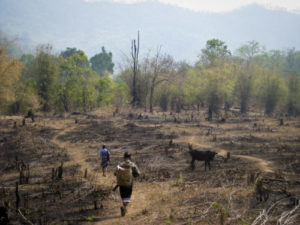 Greenhouse gas emissions from agriculture are on the rise, according to a new report based on United Nations data, with food production now accounting for 30% of global GHGs and 60% of human-produced nitrous oxide—a chemical that is 300 times more potent a greenhouse gas than carbon dioxide.

The report concludes that 21% of global emissions come from deforestation and land use changes resulting from agriculture. Between 2000 and 2012, Brazil and Indonesia accounted for almost half of that total, though “developed countries, such as the United States and China, indirectly spur deforestation through their consumption of meat, palm oil, timber, and soy,” the Christian Science Monitor reports.

Nitrous oxide emissions, meanwhile, result mostly from inefficient application of fertilizers, with China, India, and the U.S. accounting for more than 55% of the total.

“If we depend on current yield trends alone to meet future demand for food, we will need the entire global emissions allowance for keeping global average temperatures below 2°C,” the report warns. “That would leave virtually no emissions for all other sectors, including energy production, industry, and transport.”