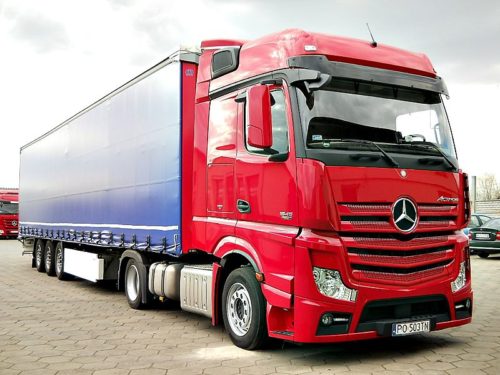 Daimler has unveiled a prototype electric truck that can carry a 25-tonne payload up to 200 kilometres (120 miles), pointing to a future in which shorter-haul freight transport might be electrified and decarbonized.

The announcement “beats Tesla to the punch,” Autoblog notes,with a design that gets two to three hours of freight transfer on a single battery charge.


To come up with the new model, Daimler “took a conventional ‘heavy-duty three-axle short-radius distribution truck’ and ripped its diesel powertrain out. In its place, Mercedes attached an electric motor to each hub on the rear axle.” The 212-kWh battery pack “runs right down the truck’s middle,” and its total range “should be enough, the Germans say, to cover a day’s worth of deliveries.”

So far, “the weight and cost of batteries as well as their limited power have prevented electric drives from being used to transport heavy loads,” Reuters notes. But “between 1997 and 2025, battery costs are likely to fall by 60%, Daimler said. At the same time, the energy density of batteries, and hence their power, will increase by around 250%.”

Daimler says the Mercedes-Benz Urban eTruck—designed, as its name implies, for short city trips rather than longer distances—“will be ready for the market by the beginning of the next decade,” EcoWatch reports.

“In the future, it will be necessary to transport goods in urban environments for increasing numbers of people—and with the lowest possible emissions and noise,” the company said in a release. “By now, large cities such as London or Paris are considering a ban on internal combustion engines in city centres in the future. That means: there will be fully electric trucks ensuring the supply of humans with food or other goods of daily needs.”