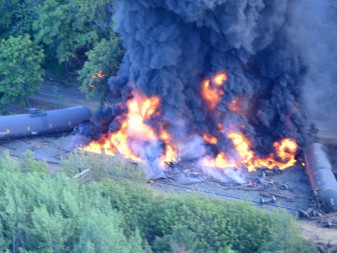 Transport Minister Marc Garneau ordered railroads operating in Canada to take the model of rail car that exploded in Lac-Mégantic, QC, in 2013, levelling most of the community’s downtown and killing 47 people, out of service no later than this November.

The new deadline advances the scheduled elimination of older, DOT-111 rail tank cars by six months, from May 1, 2017, and of a somewhat newer, jacketed version of the same standard car by 16 months from Mar. 1, 2018, the Globe and Mail reports. The ruling applies to all rolling stock entering Canada as well as trains operating domestically.

The decision will phase out the DOT-111 in Canada before they are taken off the rails in the United States, where the jacketed version is currently approved to operate until May 2023. Noting a dramatic decline in oil-by-rail shipments, however, industry watchers do not expect Canada’s ban on the two models to have much impact on the availability of tank cars.

The decision permits tank cars built to a somewhat newer standard, the CPC-1232, to continue to roll without a sunset date. However, as DeSmogBlog points out in a post, it was that type of rail car that exploded and burned following a derailment last month in Mosier, Oregon.

An even newer Canadian tank car standard, the TC-117, was adopted in May 2015. It features thicker tank shells and jackets and stronger “head shields,” which protect the ends of tank cars against puncture, among other safety features.

In a statement welcoming Garneau’s announcement, the Railway Association of Canada pointed out that “rail customers and leasing companies own the vast majority of tank cars, and are responsible for updating and retrofitting their tank car fleets.” But with the industry “swimming in tank cars right now,” one car broker told the Globe, there is little incentive to convert fleets to the stronger TC-117 standard.