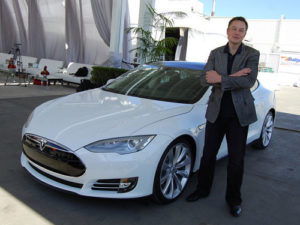 Elon Musk released the much-anticipated second phase of his “master product plan” for Tesla Motors last week, but the four-pronged strategy largely fell flat with investors and analysts holding out for more conventional business performance from the upstart automaker.

“After Musk mesmerized Wall Street for years, investors are starting to look for him to do something new: deliver financial results, or at least a road map for them,” Bloomberg Technology reports. Instead, “quintessential Musk, the mission statement he posted [last]Wednesday night was long on futuristic vision and short on details about things like how he’ll get his hands on the vast sums of cash he’ll need to execute all his ideas—for a new company blending Tesla and SolarCity, for an integrated solar-battery product, for electric buses and trucks, for autonomous ride-sharing fleets.”

The four elements of the plan include:

“The plan shows that Musk is thinking beyond how to improve on individual products, to how he can disrupt entire systems,” notes Greentech Media. “He’s thinking about how he can revolutionize the way people consume energy.”

But in the here and now, the company’s stock fell 3.4% on the Thursday after the announcement, before recovering about half of the loss by mid-day Friday.

“Now That They’ve Said It, How Do They Fund It?” was the title of an investors’ note from Morgan Stanley analyst Adam Jonas, known as one of Musk’s biggest fans. “Are public investors prepared to continue to extend capital on the same terms they have done over the past six years?” he asked.

Dieter Waizenegger, executive director of the CtW Investment Group, which represents union-sponsored pension funds, was more blunt. “Given the inbred, interlocked nature of Tesla’s board, we fear that its directors do not have the independence needed to adequately assess and execute the SolarCity transaction, much less the broader ‘Master Plan,’” he said.

“There is no real meat to chew on here,” said Dave Sullivan, of AutoPacific Inc., “which should only fuel skepticism and concern for cash burn.” “It’s all just noise,” agreed Bloomberg Intelligence auto analyst Steve Man, given limited details on timelines and financing.

“Some surmised that the timing of the announcement was a way for Musk to distract from recent headlines that have raised concerns about Tesla’s autopilot function and its troubles hitting vehicle-delivery targets,” the Los Angeles Times reported. The company had said it would ship 80,000 cars in 2016, up from 50,658 in 2015, but missed its sales goals for the first two quarters of the year.