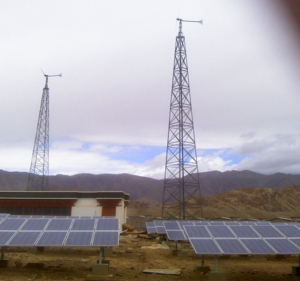 India’s biggest fossil companies are pivoting to invest more in renewables, as Prime Minister Narendra Modi continues to emphasize a shift to less-polluting forms of energy.

“We already have some wind capacities, and now we want to position ourselves big in solar,” said ONGC Chairman Dinesh Kumar Sarraf. “Investments in renewable energy are not for mere demonstration, but also because of business reasons. We are working toward giving renewables a reasonable share in our overall business mix.”

As renewable energy projects in India become less expensive to develop, renewables have become “a bright spot in an industry where state power retailers are struggling to pay their own bills after amassing 2.5 trillion rupees (US$37 billion) of debt,” Bloomberg notes. “The Indian companies are catching up to counterparts in Europe and Asia, where big energy companies have already moved into renewables.”

Justin Wu, head of Asia and Pacific for Bloomberg New Energy Finance, noted that “more renewables than coal power will be built in Asia over the next 25 years, and most of it will be built by these big conventional power companies.”