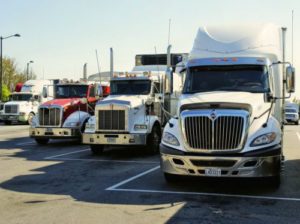 Today’s trucks may go farther on a gallon of diesel than their counterparts built a decade ago, but those marginal gains are “just rearranging the deck chairs” on North America’s road transport-reliant consumer economy, architect and developer Lloyd Alter argues on Treehugger.com.

Alter reproduces a graph that shows trains moving goods at an efficiency of 413 freight-ton-miles (ftm) for every gallon of fuel they burn, compared to truck efficiency at 110 ftm per gallon. “We have to talk about serious systemic change that gets people out of cars, that gets freight out of trucks, and back onto rail,” he concludes.