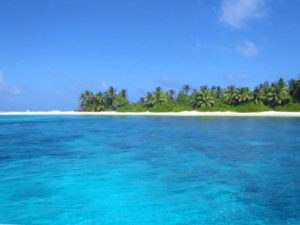 “Such a treaty, when implemented in collaboration with PIDF [the Pacific Islands Development Forum] and civil society, would send a powerful signal to markets, governments, and civil society around the world that the end of fossil fuels is near, with Pacific Islanders acting not as victims of climate change but as agents of change.”

It adds: “As there is currently no treaty that bans or phases out fossil fuels, the Treaty would set a pioneering example to the rest of the world.”

PIDF is expected to debate the proposal at its annual forum in 2017, and could adopt it as early as 2018.

“Pacific island leaders are among the most proactive in the world on global warming because their countries are bearing the brunt of climate changes,” said Joeteshna Gurdayal Zenos, acting head of Greenpeace Australia Pacific’s climate justice project, Pacific Net.

“This is an avenue where the Pacific could again show or build on the moral and political leadership that they’ve shown earlier in their efforts to tackle climate change,” added PIDF climate advisor Mahendra Kumar.

Ahead of last year’s United Nations climate summit in Paris, the 14 countries had sought to bring forward a global commitment to a 1.5°C limit on average global warming through an older forum, the Pacific Islands Forum. That effort was defeated by Australia and New Zealand, The Guardian reports, but the Paris Agreement still included 1.5°C as a target for the second half of this century.

The new PIDF treaty “embraces the aspirational 1.5°C target set at Paris, setting mitigation targets that are in line with it, as well as establishing adaptation mechanisms to cope with the effects of that warming,” the paper notes.

The urgency behind the model treaty was captured earlier this month in a Huffington Post profile of the Marshall Islands, a country that consists of five main islands and 29 coral atolls with an average elevation of six feet above sea level. “Marshall Islanders seem destined to become climate refugees as the whole country threatens to disappear below sea level by the end of the century,” HuffPo reports. “And the seas are rising faster than international law can adapt. There is no international recognition of people displaced by climate change as refugees, leaving them without legal protection or rights.”