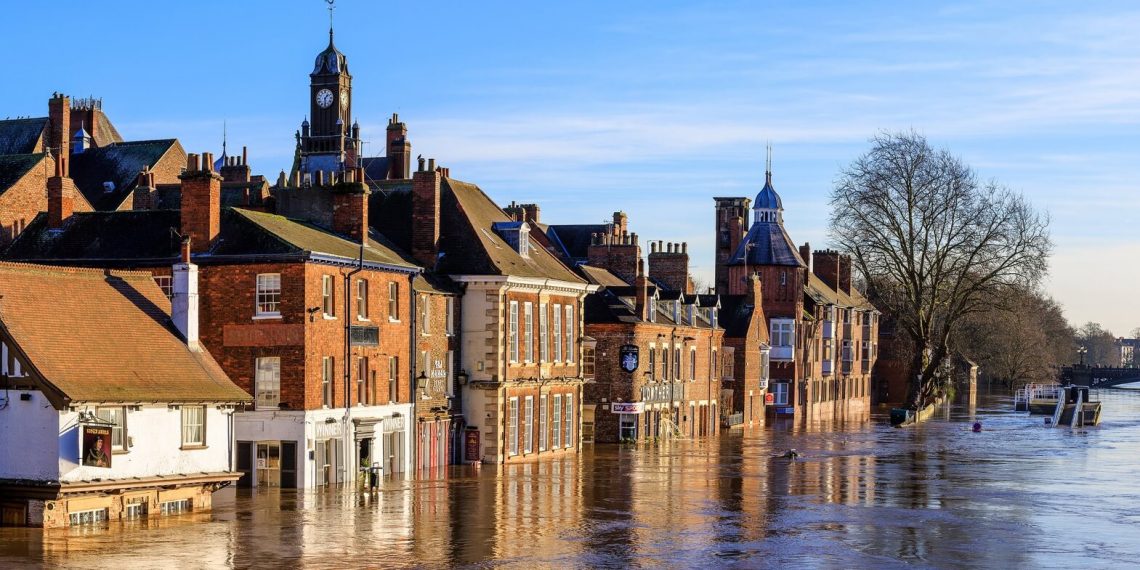 The risk of flooding is identified as one of the climate-related priorities for the UK.

Scientific advisers warn that, by 2100, temperatures in Britain could rise by twice as much as the internationally-agreed limit set at the Paris climate conference.

LONDON, 14 July, 2016 – An independent group of advisers to the UK government says the impacts of climate change are already affecting the country, and calls for urgent action to tackle the risks.

Globally, the group says, 14 of the 15 hottest years recorded have occurred since 2000: climate change is happening now, with greenhouse gas emissions from human activity the dominant cause.

It says the UK could, by the end of this century, experience dangerously high temperatures far above their pre-industrial levels. “Global emissions of greenhouse gases will need to peak soon and then decline rapidly for the Paris Agreement goals to be feasible.

“Even in this scenario, the uncertain sensitivity of the climate to greenhouse gases means there would remain at least a small chance of 4°C or more of warming by 2100.”

By 2081-2100, warming in the UK is likely to be between 1.4°C and 3.2°C, under a scenario assuming the highest level of greenhouse gas mitigation. The highest emissions scenario, though, suggests a range from 3.4°-6.2°C.

The warning comes from the Committee on Climate Change (CCC), set up to advise Parliament on progress made in reducing greenhouse gas emissions and preparing for climate change.

The report by the CCC describes what it sees as the most urgent risks and opportunities for the UK from climate change.

Significantly, given the unexpected turn of political events in the UK since the referendum vote on 23 June to leave the European Union, the report says the impact of the move does not change the overall conclusions of its risk assessment.

However, it says pointedly that some individual risks may change if EU-derived policies and legislation are withdrawn “and not replaced by equivalent or better UK measures”.

The CCC says it will assess the implications of the EU referendum decision in its next statutory report to Parliament − due to be published in June 2017 − on the UK’s national adaptation programme.

This year’s report provides details of what the authors say are the most urgent risks resulting from changes to the UK’s climate. These are likely to include periods of too much or too little water, increasing average and extreme temperatures, and sea level rise.

“The impacts of climate change are becoming ever clearer, both in the UK and around the world”

They single out several “immediate priority areas”. These are related to risks of flooding and coastal change; the impact of high temperatures on health and wellbeing; risks to natural capital; and the risks of future water shortages affecting the public water supply and water for agriculture, energy generation and industry. There would also be effects on freshwater ecology.

Two further priorities are impacts on the global food system, and risks arising from new and emerging pests, alien species and diseases that would affect people, plants and animals.

The report acknowledges that climate change could offer the UK opportunities, including perhaps increased agricultural and forestry production, if enough water is available and soil fertility is managed.

It identifies serious problems with UK soils, including declining quality from the loss of organic matter, increasing seasonal dryness and wetness, and soil compaction and erosion.

Businesses in the UK could also benefit from an increase in global demand for adaptation-related goods and services, such as engineering and insurance.

The authors take care to stress that climate change is a global threat whose effects are being felt far beyond the UK, and far more acutely in many countries.

They say: “Impacts will be imported to the UK through the price and safety of food and other commodities, changes in the patterns of trade, disruption to global supply chains, and risks to overseas investments.

“Climate change is expected to increase the frequency of weather extremes, disproportionately affecting low income populations. The UK is likely to be called upon to provide more resources for humanitarian assistance, and efforts to build state stability and long-term resilience could be undermined.”

It cites one example of the way in which extreme weather in distant parts of the world can not only disrupt supply chains but damage the UK directly. In 2012, a drought in the US contributed to increases in the price of soya, which, in turn, led to some UK pig farmers being forced out of business.

Lord Krebs, a member of the CCC, says: “The impacts of climate change are becoming ever clearer, both in the United Kingdom and around the world. We must take action now to prepare for the further, inevitable changes we can expect.” – Climate News Network