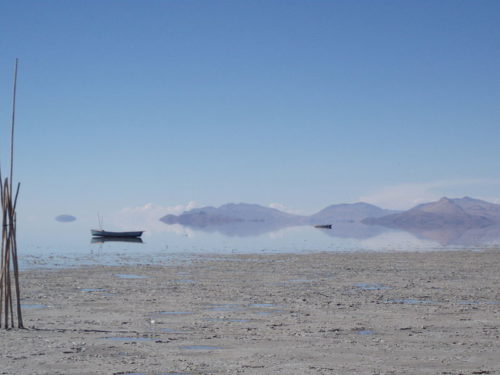 Climate change and human demands have emptied a lake in Bolivia’s high desert—and with it much of the meaning of life for the Indigenous group known for generations as the “people of the lake,” the New York Times reports in a richly-illustrated interactive journalism feature.

For the Uru-Murato people, 1,000-square-kilometre Lake Poopó was the centre of a society and an economy. Its wildlife—particularly its fish and flamingos—provided a secure source of food and medicines. Their communities’ relationship with the water body was celebrated in annual rituals like the September offering of a fish to Saint Peter, “the Fisherman”.

But water diversions for agriculture, years of little rainfall during periodic el Niño events, and the generally warming climate that accelerated evaporation from the lake, progressively drained Poopó’s waters. Two years ago its fish died off, and the flamingos that fed on them fled or also died.

Last December, Poopó disappeared completely—the first lake of economic significance in the western hemisphere to vanish as a result of climate change (numerous smaller lakes have disappeared in northern Canada). Now little of what used to constitute daily life for the former people of the lake remains possible.

“Only 636 Uru-Murato are estimated to remain” in three villages around the lake’s former shoreline,” the Times writes. “Scores have left to work in lead mines or salt flats up to 200 miles away; those who stayed behind scrape by as farmers or otherwise survive on what used to be the shore.”

“This is a millenarian culture that has been here since the start,” Carol Rocha Grimaldi, a Bolivian anthropologist, told the paper. “But can the people of the lake exist without the lake?”

The World Bank estimates that within the next two decades, 3.2 billion people—nearly half the planet’s human population—will experience water scarcity, sending some regions into “sustained negative growth.”