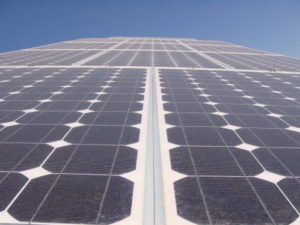 Grid-scale solar-electric systems will account for more than 70% of U.S. panel installations this year, as it dawns on utilities that unsubsidized photovoltaics now cost them less to install than the most efficient natural gas plants.

“The cost of electricity from large-scale solar installations now is comparable to and sometimes cheaper than natural gas-fired power, even without incentives aimed at promoting environmentally friendly power, according to industry players and outside cost studies,” Reuters reports this week. Which makes the rapid rise of solar on the grid “a feat driven more by economics than green mandates.”

The projection for solar installations this year comes from a study by GTM Research. But the cost figures behind the trend trace back to a study last year by investment bank Lazard, which placed unsubsidized solar costs at US 5¢ to 7¢ per kilowatt-hour—against 5.2¢ to 7.8¢ for a high-efficiency gas plant.

Industry analysts also look to a 2014 procurement in which Austin Energy, the municipal utility in Austin, Texas, bought 150 MW of grid-scale solar for a record-low 5¢/kWh. A year later, the price for nearly 1.3 GW of new capacity fell below 4¢/kWh.

“The response has been, quite honestly, astonishing,” First Solar CEO Jim Hughes told investors in April. “The utility world suddenly sat up and took notice and said, ‘I had no idea that’s where the cost of solar stood.’”

Now, with states like North Carolina, Texas, and Alabama jumping onboard, “we are seeing large swaths of centralized utility-scale solar procured primarily because of how cost-competitive it is,” GTM’s Cory Honeyman told Reuters. “That’s a different kind of narrative.”

But cost arguments alone tend to weigh against smaller-scale rooftop solar, the news agency notes, with residential system costs coming in at 18.4¢ to 30¢/kWh before subsidies. “If you take a solar panel from someone’s rooftop and put it in a field, the amount you would pay for that power drops precipitously,” said attorney Matt Freedman of California’s Utility Reform Network. “What’s the magic of having it on the rooftop? It’s not clear.”