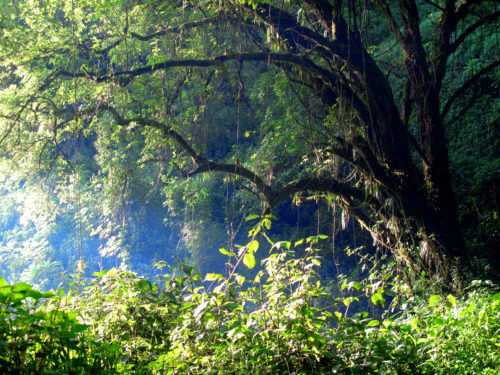 Trading cash for carbon sinks could be a stunningly simple, affordable way to protect forests and slow atmospheric greenhouse gas releases, according to a new study by Uganda’s National Bureau of Economic Research.

“The program simply paid owners of forest land not to cut down their own trees for either agricultural purposes or to sell them for timber,” the Washington Post reports. Instead, it offered landowners in 60 villages in western Uganda US$28 per year, or 70,000 Ugandan shillings, over two years, to leave the trees in the ground.

Deforestation fell to 2-5% in the participating villages, compared to 7-10% in 61 “control” villages that were offered no incentives. Deforestation rates in both groups were monitored by satellite.

“The study validates the idea that deforestation can be battled in a cost-effective way, a policy possibility that emerges in part because of vast global economic inequities,” writes Post environment specialist Chris Mooney. “This has created a situation where encouraging forest preservation in relatively poorer, developing countries, where forests are often relied on for livelihoods, turns out to be more cost-effective.”

The study placed the cost of delaying a ton of carbon entering the atmosphere at 57¢, against a “social cost of carbon” benefit of $1.11.

“The research provides a positive model for protecting a forest region that is a hub for biodiversity, including serving as a key habitat for endangered chimpanzees,” Mooney reports. The urgency to support more local initiatives under the UN’s Reducing Emissions from Deforestation and Forest Degradation in Developing Countries (REDD+) initiative was amped up, he adds, “after an explicit shout-out to the importance of combatting deforestation” in the Paris agreement.