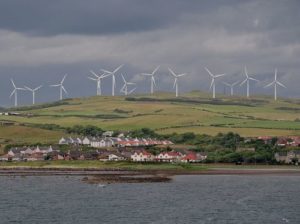 Just days after the United Kingdom committed to cut greenhouse gas emissions 57% from 1990 levels by 2032, the country’s grid operator reported this morning that the country will miss its long-term targets unless it adopts more aggressive clean energy policies.

“Even in the most environmentally minded scenario, the UK is projected to fail in its target of producing 15% of total energy from renewables,” the BBC reports. “The government no longer claims the 2020 target will be hit, but a spokesman said the UK was making good progress.” National Grid warned that the country “will not achieve its own independently set long-term CO2 reduction plans unless tougher policies are imposed very soon.”

The UK’s uptake of wind and solar electricity has beat some projections, explains the BBC’s Roger Harrabin. “But the rate of progress towards electric and hydrogen cars needs to almost treble (from 15 terawatt hours (TWh) to 40TWh) to meet the EU 2020 target,” he notes.

“On National Grid’s low-ambition scenario, the UK will miss the targets by nine years. Even the greenest scenario only reaches the [2020] targets by 2022.”

Days earlier, The Guardian had reported that the 57% commitment by 2032 “should allay anxieties in the green energy sector” that last month’s Brexit leave vote “would water down the UK’s leadership on climate change, or that the decision to approve the budget would be left to the next prime minister.” The new UK target is considerably more ambitious than the European Union’s 40% by 2030 goal.

Environmental groups had hoped for an even tougher 2032 figure, The Guardian noted. “The UK’s Climate Change Act gives us, even outside the EU, a global leadership role on climate change,” said Emma Pinchbeck, head of energy and climate change at WWF-UK. “So it’s great that the government has ignored siren voices from the fringes, listened to the scientists, and set a new target which will help boost the green economy.”

National Grid said the ultimate legislated target of 80% by 2050 will hinge on 22 gigawatts of new nuclear generation, 100 GW of renewables, and 20 GW of fossil generation with carbon capture and storage.

“The 2050 targets are still achievable, but we need much more momentum,” a spokesperson told the BBC. “The government has to change the trajectory or we are going to fail. We need to learn our lessons from where things have gone wrong so far.”

Meanwhile, UN Climate Secretary Christiana Figueres urged the UK to stay the course on its climate targets, whatever lies ahead in the wake of the Brexit vote. “Over these next two years, my suggestion would be to use the proverbial UK [tagline]: ‘stay calm and transform on,’” she said last week in London. “It’s not ‘stay calm and do nothing’, it’s ‘stay calm and transform on,’ because the UK and EU have had a very important leadership [role] on climate change. There’s no reason to change that whatsoever.”