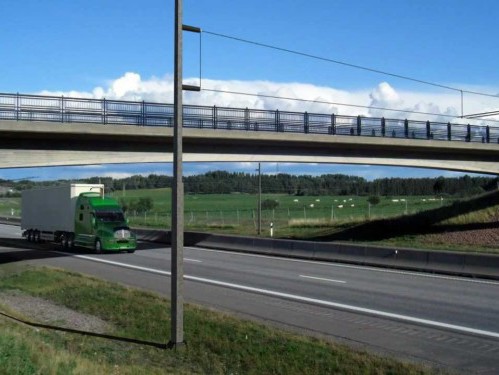 Sweden has opened a 22-kilometre stretch of highway that tests overhead power lines as a way of delivering power to hybrid-electric trucks.

If it works, the system could point to a solution to one of the toughest challenges on the road to a post-carbon economy.

“Electric roads will bring us one step closer to fossil fuel-free transport, and has the potential to achieve zero carbon dioxide emissions,” said Trafikverket Director General Lena Erixon. “This is one way of developing environmentally smart transport in the existing road network. It could be a good supplement to today’s road and rail network.”

The system would work like a tram system, EcoWatch reports, enabling the trucks to run longer distances between charges. That feature gets at the very reason many analysts believe electrified freight transport is a long way away.

“When the trucks, provided by Scania, are not on the electric stretch of road, they will operate as hybrid vehicles running on biofuel,” EcoWatch notes. “Electric-powered trucks are expected to cut 80 to 90% of fossil fuel emissions,” representing “another step toward Sweden’s goal of operating a fossil fuel-free fleet by 2030.”