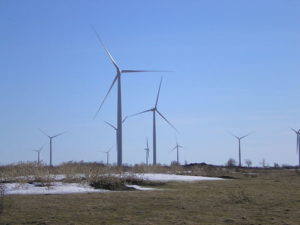 Canada may be in line for a major increase in renewable energy exports, after Prime Minister Justin Trudeau, U.S. President Barack Obama, and Mexican President Enrique Peña Nieto agreed in Ottawa this week that their countries will collectively produce 50% of their electricity from clean sources by 2025.

The trilateral commitment at the so-called Three Amigos summit “is a big trade opportunity for Canada, which has a lot more clean power to spare, as 60% of the country’s electricity comes from hydro and another 3% from solar and wind,” CBC News reports. “The amount of non-emitting power climbs to 81% if nuclear-generated power is included.”

On the other side of the continent, Mexico meets about 25% of its electricity demand with non-fossil sources. The U.S. produces about 13% of its electricity from hydro and other renewables, with another 19% coming from nuclear. Although the CBC’s summit preview focused on the potential export opportunity, White House senior adviser Brian Deese told the Washington Post that generating 50% clean power from domestic sources “is a stretch goal, but one we think is achievable in the United States itself.”

Still, as a result of the agreement, “there will be a renewed emphasis on integrating the electricity grid between the three countries to allow this clean power to be moved easily across borders,” CBC notes.

Mexico is also signing on to the agreement the U.S. and Canada reached in March to reduce methane emissions from new and existing oil and gas facilities by 40 to 45% from 2012 levels by 2025.

Overall, the ambitious agreement shows that “progress is possible,” an unnamed background source told the CBC’s Margo McDiarmid. “Environment and energy will definitely be the major topic of the summit. It’s important that we make progress on collective action. It’s at the top of the list.”

Deese said the summit was setting “an aggressive goal,” but that 50% by 2025 “is achievable continent-wide.” The countries’ alignment on climate and energy policy “is stronger than it has been in decades,” he added, noting that “in all three countries, there is a significant move toward a clean energy economy.”