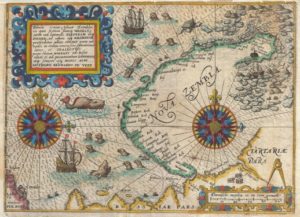 The United Kingdom’s vote to ‘Brexit’ from the European Union holds contradictory implications for the medium-term price of oil, several commenters observed, after benchmark Brent and West Texas Intermediate crude prices both plunged more than 5% in the immediate wake of the British referendum.

“We’re in ‘here be dragons’ territory,” notes Bloomberg’s Liam Denning. “Brexit’s fallout for oil will have feedback loops that can both support and squash oil prices.” Mexico’s peso, for example, also plunged after the Brexit vote over concerns that the country might lose critical oil revenue.

While “fundamentally nothing has changed” since last week’s vote, he adds, the knock-on effects of a Brexit could suppress demand in the Euro bloc, while also reducing investment in key oil-supplying nations such as Venezuela and Nigeria—leading to a tighter global crude stock, possibly resulting in upward pressure on prices.

The UK’s departure from Europe may also relax the regulatory environment there for hydro-fracturing, Oil Change International notes. “There has long been an association between Euro-skepticism and climate skepticism, [and] seasoned denier watchers have noted that many climate skeptics are vehemently pro-fracking.” Legal experts have told Greenpeace UK that “almost all of the UK’s environmental regulations on fracking could be removed if the UK votes to leave the EU,” according to Oil Change.

More alarming for the fossil-fuel industry, OilPrice Intelligence suggests, is that Britain’s vote will inspire copy-cat referenda in other European countries—followed by more departures. “This could be a new Lehman moment,” said Saker Nusseibeh, CEO of Hermès Investment Management. “If other European countries start talking about referendums, all bets are off.”

On the other hand, the same outlet found cause for fossil unease in the possibility that at least one part of the British Isles might opt to leave the UK to preserve its relationship with the EU: “If Scotland were to break up with the UK,” in order to remain in the EU, the preference expressed by the majority of its voters, “it would have massive ramifications for North Sea oil.” As sovereignty over those fields would then be transferred to Edinburgh, operators could expect “significant regulatory or contractual impacts” on their North Sea projects. (1601 Here Be Dragons map for The Energy Mix subscriber Ralph Torrie)