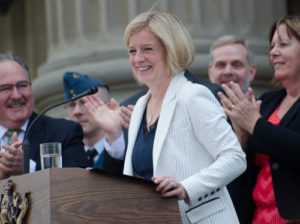 Kinder Morgan wants to twin an existing, 63-year-old pipeline from Edmonton to Burnaby, near Vancouver, and nearly triple to 900,000 barrels per day the volume of synthetic crude carried through the combined lines. The NEB’s three-year review of the plan was widely criticized for excluding the public, failing to adequately consult First Nations, and taking a very narrow view of the project’s environmental impacts. Days before its decision, the federal government named a three-person panel to review its work and reassess the upstream emissions from the bitumen producers that will supply it.

Notley directly challenged that instruction in a meeting with the panel last week in Edmonton. “This particular pipeline application ought to be considered on its individual merits,” Notley told reporters afterward, “not as a symbol of the much larger issue.”

Because her government has said it will cap tar sands/oil sands emissions at 100 megatonnes, she said the review of the NEB’s decision “ought not to be seen as a mechanism for dealing with emissions management.”

However Notley’s NDP government now has fewer than four years left in its term, while production of bitumen is expected to continue for decades—perhaps under more permissive rules introduced by a future government.