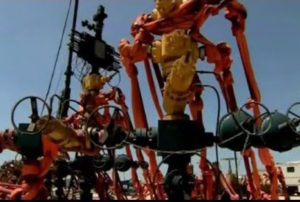 Canadian tar sands/oil sands producers showed boundless and possibly ill-advised optimism in their responses to their industry association’s annual survey, claiming they expect production to increase by 1.55 million barrels per day by 2030.

That assessment stands in the face of persistently low oil prices, tougher competition from clean energy, and the imperative to keep the large majority of the world’s known fossil reserves in the ground.

The report is a survey of producers’ expectations, not an analysis of future markets for fossil fuels. But on that basis, “CAPP expects the sector to add 850,000 barrels a day (b/d) between 2015 and 2021, largely as a result of projects begun before the 2014 price collapse,” the Globe and Mail reports. “Between 2021 and 2030, oil sands producers are expected to boost supply by 700,000 b/d, despite the cancellation or delay of numerous major projects over the past two years.” That expectation is 300,000 barrels short of CAPP’s 2015 estimate.

“All forecasts show the demand for crude oil is going to increase fairly substantially between now and 2030,” McMillan told the Globe’s Shawn McCarthy. “If that oil demand in India and China isn’t being supplied by Canada, those investments will go to Venezuela and Nigeria and Angola and Saudi Arabia.”

But McCarthy notes that CAPP’s projection “is based on an assumption that the world will not meet the goal of holding global temperature increase to less than 2°C above pre-industrial levels. Under a 2° scenario, the International Energy Agency sees global oil demand peaking and declining to 87-million barrels a day by 2035.”

Greenpeace Canada climate campaigner Keith Stewart said the projection was inconsistent with Canada’s current objective of reducing greenhouse gas emissions 30% from 2005 levels by 2030—a target that both Prime Minister Justin Trudeau and Environment and Climate Change Minister Catherine McKenna have described as “a floor, not a ceiling”.

“I can understand why oil companies want Canadians to believe our energy future is tied to what they are selling,” Stewart said, “but our governments should acknowledge that there is no market for this additional high-carbon oil in a world that is acting on climate change.”

Last month, ex-journalist Kai Nagata of the British Columbia-based Dogwood Institute argued that Canada wouldn’t be the beneficiary if the Alberta oil industry could actually get more of its product to tidewater. “What happens when you pump more product into an oversupplied market? Answer: the price goes down,” he wrote. “Who benefits from cheaper crude oil? First, the customers — like China’s state-run heavy oil refineries. And later, competitors with lower overhead, like Saudi Arabia.”

In April, ex-fossil executive Ross Belot concluded that the moment of triple-digit oil prices that would have justified new pipeline capacity had passed, never to return.

“Alberta’s problem is twofold: Its oilsands have been buried by fracked American oil that is both higher-value and cheaper to produce, while longer-term they face marginalization in a world committed to weaning itself off carbon,” Belot warned. “So another pipeline isn’t needed,” meaning that “money spent on a pipeline right now would be money wasted.”

And in February, Bloomberg New Energy Finance projected that electric vehicles will be cheaper to own and operate than internal combustion cars as early as 2022—just in time to usher in the next oil price crash.

“The oil price crash that started in 2014 was caused by a glut of unwanted oil, as producers started cranking out about two million barrels a day more than the market supported,” wrote Bloomberg correspondent Tom Randall. “Nobody saw it coming, despite the massively expanding oil fields across North America. The question is: How soon could electric vehicles trigger a similar oil glut by reducing demand by the same two million barrels?”