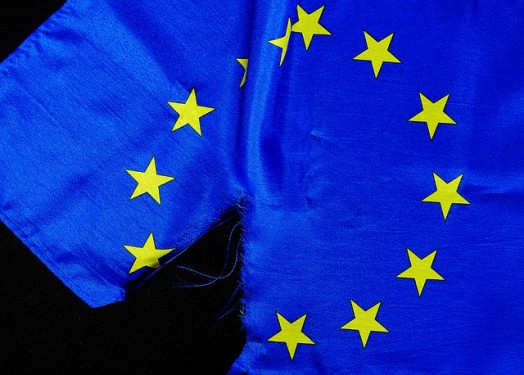 Britons’ referendum decision last night to leave the European Union will roil national and regional climate and environmental policy as surely as it has brought initial chaos to British currency and global financial markets, leading environmental organizations are warning today.

Politico UK reports that a post-Brexit UK “will still be tied to the rest of Europe through gas and electricity links and an emissions trading market it is unlikely to ditch,” but will also now have “far more freedom to pursue nuclear projects.” It cites analysis by think tank E3G suggesting that a new British government might abandon the country’s renewable energy targets and power plant pollution taxes.

A post-Brexit government could also shift Britain’s response to the Paris agreement. “It could potentially submit a highly ambitious [nationally determined contribution] to the UN, it could ramp down its ambition, or it could ignore it, which would be a blow to the whole process,” said senior environment and climate change analyst Will Nichols of Verisk Maplecroft.

“There is a very real fear that Cameron’s successor will come from the school that supports a bonfire of anti-pollution protections,” warns Greenpeace UK Executive Director John Sauven, following a decisive campaign result that prompted pro-fracking, pro-nuclear Prime Minister David Cameron to announce his resignation.

“The climate change-denying wing of the Conservative Party will be strengthened by this vote for Brexit,” Sauven writes. “That means the green movement, indeed every Briton who values a clean and safe environment, may need to stand up for nature in the face of an attack on the natural world.”

Since “the environment barely featured in this campaign,” he adds, “whoever comes to occupy Downing Street does not have a mandate to gut the environmental laws that we all rely on to protect us from pollution.”

UK fossil majors BP, Shell, and Centrica had all signed a business leaders’ letter in February, warning of the economic and investment risk of a pro-Brexit vote. “Investors like long-term predictability, so the UK’s exit will likely cause upheaval for businesses planning to build renewable energy plants or drill for shale gas in the UK, at least for a couple of years,” Politico notes. “Investor uncertainty often comes with a risk premium,” said Chatham House Senior Research Fellow Antony Froggatt.

“All evidence shows that EU membership has brought many environmental benefits for citizens and nature in the UK and across Europe, resulting in cleaner air and water, helping preserve habitats and species, accelerating the transition from fossil fuels to renewable energy, and cutting carbon emissions,” Pons notes. “Neither the environmental decline we are experiencing nor climate change stop at borders, and they need to be tackled urgently, whether as a member of the EU or not.”

In a post last week, the World Future Council’s Martin Bosak traced Britain’s “ambivalence on the climate-energy nexus,” noting that the country was a laggard on implementing EU air pollution regulations, but a leader on ambitious climate targets.

Britain was a staunch European leader in offshore wind production that nevertheless “firmly opposed the EU Commission’s interference in determining the national energy mix in favour of renewables. That was clearly a step backwards, since shifting towards renewable energy is an inevitable component of an effective climate mitigation strategy that is capable of drastically reducing greenhouse gas emissions.”

Now, however “to achieve a positive European future, characterized by a green and low-carbon economy, state sovereignty and national self-interests are going to have to recede,” Bosak wrote. “Purely national solutions are simply not going to be enough to solve complex environmental problems, such as climate change, pollution and biodiversity loss which often pay no heed to national borders.”

But Canadian energy journalist Andrew Nikiforuk counters that the Union’s size and unwieldiness has been its own undoing. “In the end, bigness—like any empire—concentrates power and delivers misery, corruption, and waste,” he writes. “And that’s the problem today with the European Union, with big corporations, large governments, and a long parade of big trade pacts.”

In a “global labyrinth of bigness,” he adds, the EU “has become another symbol of oversized ineptness, along with a technological deafness that ignores locality, human temperament, culture, ecology, tradition, democracy, and diversity.”

“There is nothing about freedom, solidarity, or friendship in the European Union. The European Union has proven to act on behalf of the interest of banks, multinational enterprises, and groups in the shadow, as advised by professional think tanks and lobbyists, not in favour of its people,” a group of Greek citizens wrote to Britons last week. “The European Union is designed as a cartel and typically, there is a lack of democratic structures and processes: democracy becomes a disturbing factor.”