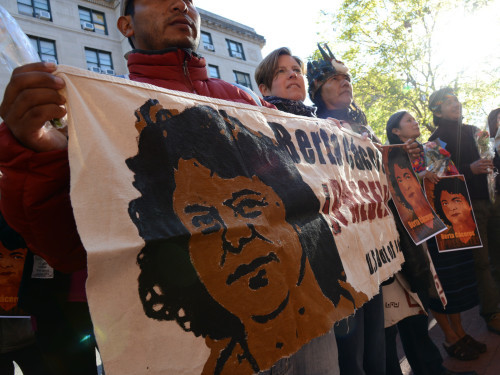 185 campaigners in 16 countries, 40% of them Indigenous people, were killed last year defending land rights and the environment from mining, dams, and logging, making the environment “a new battleground for human rights,” Global Witness reveals in a report released earlier today.

The total toll of more than three deaths per week made 2015 the deadliest year for activists since 2002, with 50 murdered in Brazil, 33 in the Philippines, and 26 in Colombia. “For every killing we document, many others go unreported,” said Global Witness spokesperson Billy Kyte.

“A major reason behind the big jump in killings is impunity, people know they can get away with these crimes,” he added. “Increasingly, communities that take a stand are finding themselves in the firing line of companies’ private security, state forces, and a thriving market for contract killers.”

Conflicts over mining projects were linked to the largest number of deaths. But “large-scale agricultural plantations, cattle ranching, hydroelectric dams, and logging were also to blame for the growing violence against campaigners,” the Thomson-Reuters Foundation reports. “Indigenous groups campaigning to protect their lands and livelihoods in Brazil’s Amazon rainforest from illegal loggers were particularly hard hit, as were the Lumad Indigenous tribe in the Philippines in the Mindanao region, rich in coal, nickel, and gold, protesting against mining projects.”

The report points to governments’ failure to recognize Indigenous land rights as a key factor behind the violence. “Indigenous people come into conflict with companies, often with state backing, looking to develop their ancestral land without their consent,” Global Witness reported.