Ducks give lowdown on Pacific changes 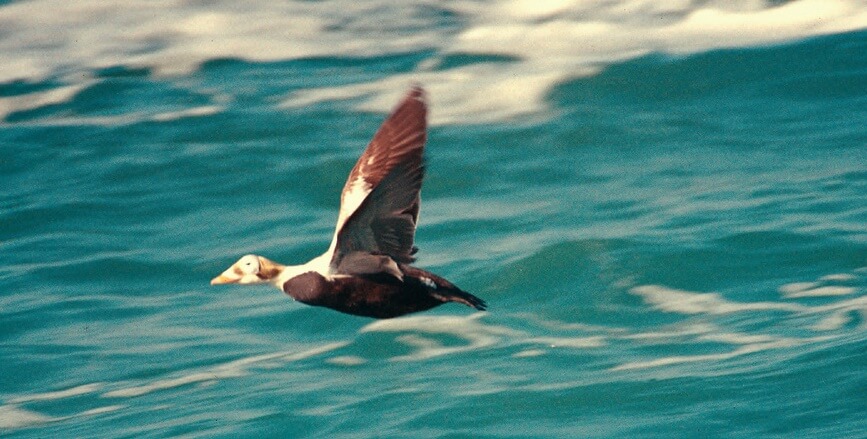 A spectacled eider duck in flight off the coast of Alaska. Image: Dominic Sherony via Flickr

Tracking eider ducks with satellite transmitters as they seek to stock up on food before the Arctic winter gives scientists a deeper insight into shifts in ocean ecosystems.

LONDON, 18 June, 2016 – Climate change may be starting to affect the marine ecosystems in the coldest parts of the North Pacific and the Arctic Circle. And the people who can monitor what’s happening are ornithologists.

They watch what the eider ducks – truly ducks, but sea-going – do in the moulting season. Since the ducks need to feed, and the late summer moult is stressful, where they choose to float in the water is as good a guide as any to where the molluscs are.

Matt Sexson, a wildlife biologist at the US Geological Survey’s Alaska Science Centre, and colleagues report in The Condor: Ornithological Applications journal, published by the American Ornithologists’ Union and Cooper Ornithological Society, that they caught eiders during the breeding season on land, implanted a satellite transmitter, monitored the bird’s  recovery, and then released the spectacled eider (Somateria fischeri) back into the wild.

They watched where the birds chose to stock up on calories for the Arctic winter, and then compared their latest data with satellite telemetry from the mid-1990s. What they found was that, in the intervening two decades, two of the birds’ favoured primary moulting areas had shifted.

Eiders feed on cold-water, bottom-dwelling invertebrates. So the presence of eiders on the surface indicates a shift in ecosystems far below. And it really is far below; eiders have been known to dive 70 metres to gather bivalve molluscs.

“It’s easier to track marine predators than it is to track their prey,” Sexson says. “It’s tough to speculate on the connection with climate change because the data are so sparse, but we know that the North Pacific is changing.

“Eiders provide a readily available indicator
that changes are occurring”

“There’s a lot of corresponding evidence that together all says something big is happening here, and eiders provide a readily available indicator that changes are occurring.”

Warming temperatures in the Bering Sea between Alaska and Siberia seem to indicate a change in the submarine ecosystem, and additional evidence comes from the California gray whale, which has expanded its range northward into the Chukchi Sea across the Arctic Circle. Pacific walruses selectively feed in the Bering Sea, another indirect indicator of riches on the sea bottom.

The jury is still out. The scientists say they need to know more about eider habits and more about the nature of change below the surface. There could be factors at work independent of climate change.

But there is already research to suggest that a warming Arctic creates problems for the species that exploit the region’s resources.

And seabirds well to the south are responding to change. The fish of northern waters are on the move, and changing temperatures and ocean chemistry as a consequence of human combustion of fossil fuels puts many aspects of commercial fishery at risk.

So the scientists at least tentatively put the shift in hunting grounds down to changes below the surface.

The duck whose down gave a name to a quilted bedspread that keeps the world warm may yet prove an indicator of global warming too. But the authors make a more cautious claim.

They report: “Assuming that spectacled eiders moulted in areas where environmental conditions met requirements for feather growth and survival, and that shifts in their distribution mirrored changes in these environments, we interpreted observed shifts in marine moulting areas as indicators of ecosystem change.” – Climate News Network