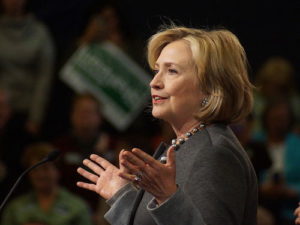 As the presumptive Republican nominee for U.S. president doubled down on a racially-tinged appeal to American nativism in the wake of another gun massacre, this time in Florida, environmental groups “are hoping to rally voters concerned about the environment to vote for Hillary Clinton,” DeSmogBlog reports.

Goaded by Donald Trump’s all-fossil energy strategy, unveiled during a recent speech in the centre of North Dakota’s Bakken shale oil development, his dismissal of climate change as a “hoax” conducted by China, and his strong showing in several polls against his Democratic rival, environmental groups such as the Natural Resources Defence Council (NRDC) and the Sierra Club are hoping to rally their supporters behind Clinton.

For many in the American environmental movement, “the choice in the 2016 election is clear: someone who would continue and expand President Obama’s aggressive environmental agenda, or Republican Donald Trump, who says he would undo every piece of it that he could, including the Clean Power Plan and the Paris climate agreement,” DeSmog reports, citing The Hill.

(Last month, Grist listed five factors that would make it impossible for Trump to walk away from the Paris deal.)

Although U.S. Green Party nominee Jill Stein’s “primary focus is on protecting the environment and tackling climate change,” DeSmog writes, she was “left out of endorsements, as ENGOs opted instead to act ‘strategically’ in throwing their support to Clinton.”