Time for U.S. Business to Lobby on Climate: Whitehouse 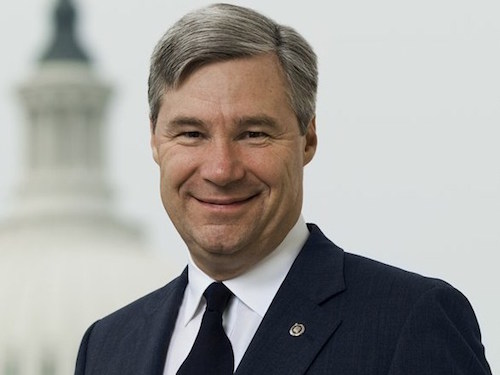 It’s time for sustainable businesses in the United States to includes climate change in the list of priority issues they bring to members of Congress, Sen. Sheldon Whitehouse (D-RI) asserts in an opinion piece in Forbes.

“Washington’s dirty secret is that even the American companies that are really good on sustainability put net zero effort into lobbying Congress on climate change,” Whitehouse writes. And those that do, direct their lobbying efforts through associations like the U.S. Chamber of Commerce, the National Association of Manufacturers, the National Federation of Independent Businesses, or the Farm Bureau that “have all been coopted by fossil fuel interests.”

The result, he says, is that the legislative efforts of “otherwise terrific companies goes net negative; the lobbying they support actually runs against their stated positions on sustainability and climate.”

Whitehouse cites recent meetings with a technology business alliance, a lumber association, and an insurance group—all of which have interests that align with strong climate policy, but none of which saw fit to lobby for those interests.

“I asked them all, if you are not going to lobby on climate change, who do you think will?” he writes. “If TechNet with its green energy firms, the lumber industry with its climate challenges, and the property casualty insurance industry paying for storm damage, all come to Washington and don’t even have climate change in their lobbying portfolio, what do they expect from Congress?”

Corporate leaders have told Whitehouse they worry about retribution if they stand out on climate. But now, he says, there’s safety in numbers.

“One of the unheralded features of the Paris Accord effort was the impressive gathering of American corporate leaders that assembled to support a strong climate deal,” he writes. And “in my experience, plenty of Republican members of Congress would like to get to work on climate change for reasons of principle, or because of constituent demands, or from simple fear of being appallingly wrong on a vital issue. But their immediate calculation is that the fossil fuel industry will punish them if they dare, and they won’t have a single trustworthy friend at their side.”

All of which underscores the importance of “getting something big done on climate in Congress,” Whitehouse concludes. That day may be closer than it seems, but to make it happen, “the good guys in the corporate sector have to start showing up.” (h/t to Grist for first pointing us to this story)