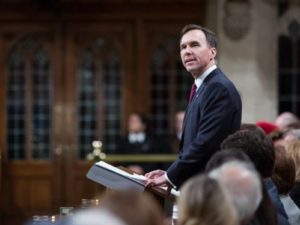 Federal officials are quietly studying whether some form of national carbon tax would help close the gap between the anticipated effects of current climate policies and the 30% greenhouse gas reduction by 2030 that Canada promised in Paris, the Globe and Mail reports.

Prime Minister Justin Trudeau and the provincial premiers agreed in March that Canada’s governments need to implement some form of carbon pricing. Finance Minister Bill Morneau is known to favour a carbon tax, and “four provinces representing 80% of Canada’s emissions already have or are introducing carbon-pricing programs, either in the form of a direct tax or cap and trade: British Columbia, Alberta, Ontario, and Quebec,” the Globe writes.

Saskatchewan Premier Brad Wall has been the most vocal resister to a federal tax, but Nova Scotia and Quebec are also opposed. Ontario, which is planning to join Quebec and California in the Western Climate Initiative carbon cap and trade market, has also come out against an add-on federal levy.

According to the Globe, “officials are looking at a number of options,” including an increase in Ottawa’s existing 10¢-per-litre excise tax on gasoline and 4¢-per-litre tax on diesel. Other options would allow provinces more leeway to introduce their own programs with equivalent effect. No decisions have been made, but Trudeau recently reiterated his intention to have a minimum carbon price—whether made-in-Ottawa or made-in-the-provinces—by autumn.