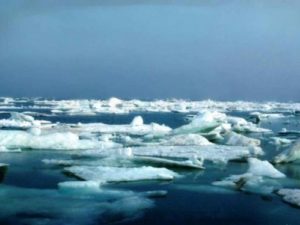 The global fossil giant is transferring the permits to the Nature Conservancy of Canada, which will in turn hand them on to the federal government.

“Relinquishing the more than 860,000 hectares’ worth of permits—roughly 1½ times the size of Prince Edward Island—now clears the way to establish a national marine protected area in Lancaster Sound, most of which is already under consideration for conservation,” reports CBC Northern Service.

“This really paves the way for an open dialogue for how big to make the national marine protected area, and the establishment of it,” said Nature Conservancy President John Lounds. “What this does is allow for the expansion of the area without any kind of worry about whether the permits would continue to exist.”

Earlier this year, Greenpeace and WWF Canada asked the Federal Court of Canada to confirm that the 45-year-old permits had long since expired, even though the federal government seemed willing to honour them. Shell told CBC the court reference had no bearing on the decision to hand over the permits. But in a June 8 email to supporters, EcoJustice Executive Director Devon Page took a victory lap for representing the two environmental groups in the case.

Lancaster Sound “is one of the richest marine mammal areas in the world, home to narwhals, belugas, bowhead whales, ringed seals, harp seals, and walruses, and harbours one of the highest densities of polar bears in the Canadian Arctic. The area also provides breeding and feeding habitat for about one-third of eastern Canada’s colonial seabirds, including thick-billed murres, black-legged kittiwakes, ivory gulls, and northern fulmars,” EcoJustice states, in a case summary that predates this week’s announcement.

A successful conclusion to the case “would remove the obstacle Shell’s expired permits pose and allow the finalization of the Lancaster Sound National Marine Conservation Area.”