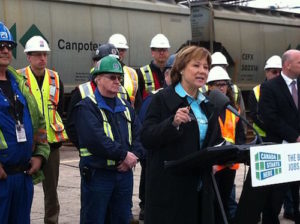 Weaver, an oceanographer who shared in a Nobel prize for his part in drafting the Intergovernmental Panel on Climate Change’s Fourth Assessment Report in the mid ‘00s, now sits as a member of the B.C. Legislature. The province won international kudos in 2008 when then-Premier Campbell introduced a sweeping set of policies, including North America’s first carbon tax, aimed at slashing its greenhouse gas emissions by 33% below 2007 levels by 2020.

Since Clark replaced Campbell in 2011, however, she has rolled back or failed to sustain key elements of his program, Weaver charges.

“The B.C. government has stopped hiking carbon taxes, ended incentives for homeowners to be energy efficient, amended the Clean Energy Act to exclude emissions from liquefaction in the LNG industry, and repealed its own cap and trade legislation,” the National Observer reports. The province’s emissions rose by 2.4% in 2013, and an analysis by the Pembina Institute indicates that if liquefied natural gas exports match Clark’s aspirations, they could skyrocket by 50% above present levels.

“It’s shameful,” Weaver told the Observer. “What galls me is when the government has the audacity to stand before people and claim they are a world leader in climate policy. Emissions have gone up year after year since Christy Clark came in. This emperor has no clothes, and it’s time for people to realize what’s going on here.”

The B.C. government is expected to release a long-delayed update to its climate plan this spring.