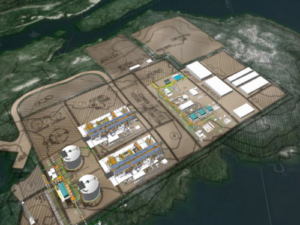 The Pembina Institute is fact-checking the British Columbia government’s math, after Environment Minister Mary Polak came in with an estimate for greenhouse gas emissions from the proposed Pacific North West LNG project that was 68% lower than the calculation from the Canadian Environmental Assessment Agency (CEAA).

The federal agency placed the project’s emissions at 11.4 million tonnes of carbon dioxide per year. But last week, after an open letter from 90 scientists and climate specialists urged Prime Minister Justin Trudeau to refuse the project, Polak placed her estimate at 3.7 million tonnes.

While an effective provincial climate plan could bring the $36-billion project’s emissions closer to Polak’s estimate, Pembina’s Matt Horne points to two factors—emissions from the second phase of the project, and deficiencies in B.C.’s LNG legislation—that bring the total closer to the CEAA figure.

“When you account for both phases of the project and the actual anticipated carbon pollution from the LNG terminal, the total estimate jumps to between 7.4 million and 10.4 million tonnes per year,” Horne writes. “The lower end of the range assumes that methane emissions are reduced significantly and upstream operations are powered mostly by renewable electricity instead of gas.”

While “these shifts are possible, he adds, “they will require new climate policies. If those policies don’t materialize, the upstream improvements won’t happen and the province’s estimate will change to 10.4 million tonnes. That’s almost all the way back to the agency’s estimate of 11.4 million tonnes.”

Meanwhile, a former provincial Liberal leader described by the Vancouver Sun as “Premier Christy Clark’s hand-picked advocate for liquefied natural gas” received a mix of cheers, laughter, and boos last week when he claimed the province has a “moral obligation” to save China from deadly air pollution by developing its LNG industry.

“The trouble with Gordon Wilson’s statement is there’s absolutely no evidence B.C. LNG will result in the use of less coal in China,” responded NDP critic George Heyman. “He shouldn’t be inventing wildly exaggerated claims of saving Chinese lives to justify LNG development in B.C.”