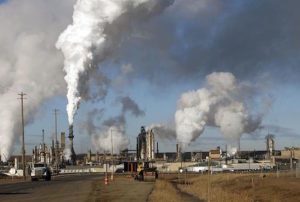 Projected growth in the Alberta tar sands/oil sands and British Columbia’s natural gas industry will make it virtually impossible for Canada to meet its international climate commitments, according to a report last week by the Edmonton-based Parkland Institute and the Canadian Centre for Policy Alternatives.

“Short of an economic collapse, it is difficult to see how Canada can realistically meet its Paris commitments in the 14 years remaining without rethinking its plans for oil and gas development,” said earth scientist and report author David Hughes.

“If oilsands production grows to Alberta’s new annual limit of 100 megatonnes and B.C. builds the five liquefied natural gas (LNG) export terminals it is proposing, Hughes estimates it would be nearly impossible for the rest of the country to reduce emissions fast enough to compensate,” CBC reports. “Even if just one LNG terminal is built in B.C., the report estimates emissions in sectors other than oil and gas would have to contract by 47% by 2030.”

Environment and Climate Change Minister Catherine McKenna has repeatedly said the country’s Harper-era target of a 30% GHG reduction by 2030 is “a floor…not a ceiling.” The Parkland-CCPA analysis puts even the floor in doubt if new energy megaprojects go ahead.

Hughes also concluded that Canada has enough pipeline capacity, with no new construction, to handle the 45% increase that would bring Alberta up to its 100-Mt. cap.

Alex Ferguson, vice-president of policy and performance with the Canadian Association of Petroleum Producers (CAPP), told CBC the report had failed to factor in “the role of technology and innovation in reducing emissions,” CBC’s Robson Fletcher writes. “The oilsands industry fully expects to increase production in the coming years while staying below Alberta’s 100-megatonne annual emissions limit through a variety of technological advances.”

But the Parkland-CCPA report said emissions per unit of production are likely to increase, “as bitumen is increasingly being recovered using in situ methods that produce more greenhouse gases than surface mining.”