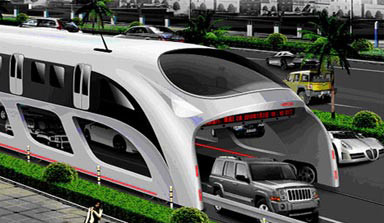 A design team in China has come up with a prototype for a “straddle bus” that can carry 1,400 passengers and move through city corridors at 60 kilometres (40 miles) per hour, travelling on elevated stilts that lift it above the congestion on regular roads.

The model was on display in late May at Beijing’s International High-tech Expo, 45 years after the idea was first put forward by New York architects Lester Walker and Craig Hodgetts.

“Designer Song Youzhou says it will save a lot of road space, costing only 15% what a subway costs but serving pretty much the same function,” Treehugger reports. “It can also be built much more quickly. Given that it has the capacity of 40 buses, it will significantly reduce pollution and carbon dioxide emissions.” (h/t to Bill Cramer for pointing us to this story)