‘Green’ Fundy Tidal in the Eye of the Beholder 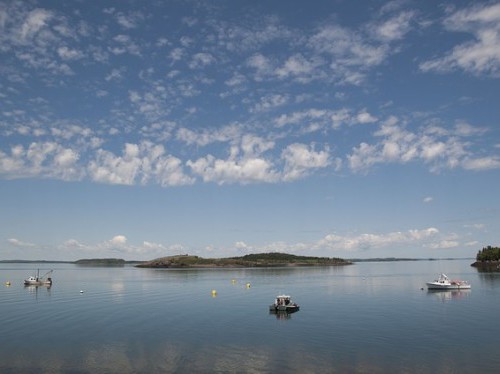 The potential clean power to be captured from the Bay of Fundy’s 12-metre tides has captivated generations of engineers. But plans to install the first of two, two-megawatt turbines at a test-bed facility next month have raised the ire of the Bay’s other users: its fishers.

Cape Sharp Tidal intends to install the two 16-metre test at the Fundy Ocean Research Centre for Energy (FORCE) site near Parrsboro, N.S. The test bed was created for that purpose by the federal and provincial governments with funding from Encana Corporation and the developers that anticipated using the site. Black Rock Tidal Power Inc. hopes to test a 2.5-MW system of 40 smaller, four-metre turbines at the same site next year.

“The new turbines,” Canadian Press notes, “are a bigger and more robust version of a turbine tested by OpenHydro and Nova Scotia Power in 2009 that was heavily damaged by the Bay of Fundy’s powerful currents.”

Wind and waves aren’t all the project is contending with, though. The Halifax Chronicle Herald reports that local fishermen “are building a legal war chest to launch a court fight” against the tidal tests. According to the president of the Bay of Fundy Inshore Fisherman’s Association, “they haven’t consulted with us and don’t have the proper studies in place.”

“It’s not that we’re against it,” Chris Hudson told the paper. “But they shouldn’t be allowed to just jump over everybody.”

Other fishers have clearly made up their minds already. “If our province and scientists won’t save the Bay, then we will,” said Darren Porter, a weir fisherman who attended a meeting in Digby to raise money to finance legal opposition to the tests. “Fishermen were emptying their pockets to donate and writing cheques for large sums of their personal money to put a stop to this.

“We’re not going to stand by and watch this be destroyed. We—Nova Scotians and Canadians—will be the ones to lose everything, and the fishermen will be the ones who will be blamed for the collapse of the fishery.”

A recent review of the science by the U.S. Pacific Northwest National Laboratory found that fish mortality from tidal installations has not been adequately studied.