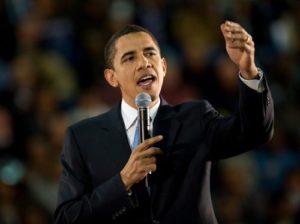 One of U.S. President Barack Obama’s top energy advisors rules out the imperative to leave most known fossil fuel reserve in the ground as a strategy to keep atmospheric carbon levels within a range that human society may be able to adapt to, DeSmogBlog reports.

Numerous calculations of current concentrations of greenhouse gases and known atmospheric chemistry and physics point to the conclusion that 80% or more of the world’s known fossil fuel reserves must remain buried to prevent combustion emissions from pushing global average temperatures up by more than 2ºC above pre-industrial levels—provoking catastrophic disruption to climate and weather systems.

Nonetheless, “we’re certainly not advocating any strategy for reducing hydrocarbon emissions by keeping oil in the ground,” insists Christopher A. Smith, Obama’s assistant energy secretary. “That’s not a position.”

Smith previously worked for Texaco and Chevron, DeSmogBlog reports, and was instrumental in what it describes as the administration’s “embrace” of the use of hydro-fracking to release so-called “tight” oil, the basis for the resurgence of American oil production in the last decade.