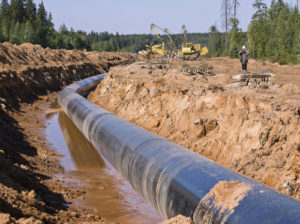 “Prime Minister Trudeau encouraged me to speak my mind,” Steven Guilbeault told delegates Friday in a speech to the Liberal Party of Canada’s annual convention in Winnipeg. “Let’s talk pipelines, then.

“Prime Minister,” the environmental activist and co-founder of Quebec ENGO Équiterre continued, “large pipeline projects have failed to get social licence all across the continent. From Lincoln, Nebraska, to Kitimat, B.C., to Montreal, Quebec—communities don’t want them.

“I know this is hard for some of you to hear,” Guilbeault told party delegates, “but I believe it to be the truth. [In] a world working around the clock to avoid the worst of climate change, it makes no sense from an ethical and a moral perspective to produce and ship more of a substance that disrupts the future of our children and grandchildren.”

Guilbeault’s Montreal-based organization has been an active opponent of the extension of the proposed Energy East bitumen pipeline through the city.

He was followed on the convention stage by ARC Financial economist Peter Tertzakian, who argued that fossil fuels are required to support the “transition” to a post-carbon economy. Canadian synthetic tar sands/oil sands crude, he added, is “some of the best oil in the world in terms of its responsible development and its cleanliness.”

The Trudeau government has repeatedly expressed its support for delivering Canadian oil to world markets. Posing with Guilbeault later for pictures, Environment Minister Catherine McKenna commented that “the good news” for those who share his views “is the Liberal Party wants to hear from a diversity of perspectives.”

Nonetheless, the convention programming confirmed what has become increasingly clear in recent months, CBC News observed, that “pipelines and climate change [are] the generational and national questions of the moment.” The same issues, it noted, “tore a chasm through the NDP convention last month,” with Alberta’s pro-pipeline NDP Premier Rachel Notley on one side and that party’s left wing on the other.