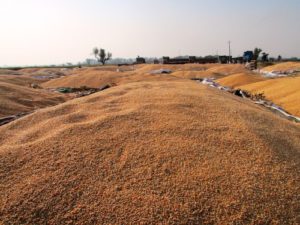 Yes, there will be crops growing in the hotter, drier fields of the day after tomorrow. The bad news from the United Nations Environment Program: they may kill you and your livestock.

Extreme weather conditions and rising temperatures “will make 70% of the world’s agricultural production toxic to animals and humans across the globe,” the Kathmandu Post wrote, citing a UNEP report released last week.

The hazardous toxins include nitrates and prussic acid. Nitrates accumulate in wheat, corn, millet, and soybeans during droughts, when plants cannot fully metabolize them. Prussic acid is deposited on crops such as maize, cherries, apples, and others, as a result of heavy rainfall after prolonged dryness.

In normal conditions, plants can turn nitrates into protein. But during extreme weather conditions, they cannot complete that process and the chemicals accumulate. Poisoning occurs, the paper reports, when livestock eat forage containing the toxins, which “convert oxygen-carrying hemoglobin in the blood to methemoglobin, which cannot carry the life supporting gas.”

Meanwhile, more than 4.5 billion people in developing regions may eventually be at risk from aflatoxin from fungi found in groundnuts, maize, oilseeds, peanut, sorghum and tree nuts. “In many African and Central American countries, a subsistence farmer may eat 500 grams of maize per day,” Kansas State University plant pathologist John Leslie noted. “They can easily be exposed to threatening levels of aflatoxin, even if the grain meets the safety standards set by the EU.”