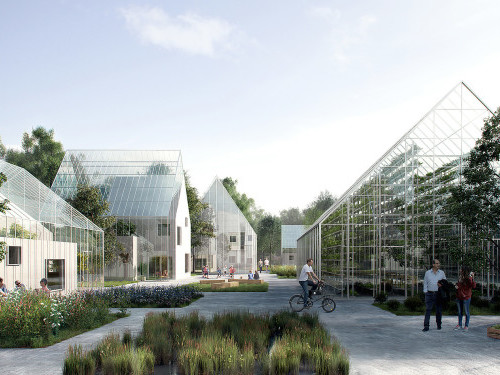 The first ReGen Village breaking ground this summer hopes to usher in a high-tech, mass-market, and turnkey option for close to 100% sustainable living, its developer says.

California based ReGen Villages and its Danish design partner Effekt plan to start construction on the first of their planned communities on the fringes of Almere, a bedroom community outside Amsterdam. It’s designed to be as close to self-sufficient in energy, food, and waste management as possible, says ReGen CEO James Ehrlich, “entrepreneur-in-residence” and senior technologist at Stanford University.

The 135-home community (including 35 condo units) will produce all of its own energy, Fast Company reports on its FastCoExist blog, “using a mixture of geothermal, solar, solar thermal, wind, and biomass. A smart grid will distribute power efficiently, sending it to a carport to charge shared electric cars as needed. A biogas plant will turn any non-compostable household waste into power and water.”

“We’re looking at some very interesting technologies for small-footprint biomass that can take surrounding farm waste and turn that into a consistent energy source, in a way that can power these communities in northern Europe even in the dead of winter,” Ehrlich told CoExist.

Compostable household waste will feed animals, or soldier flies that will in turn be fed to fish. Fish waste will be used as fertilizer. Seasonal gardens will sprout between the houses and around the community.

ReGen, which will also manage the community, hopes to create a second concept community in an arid setting like the Middle East before expanding to other geographies, Ehrlich says.

“We tackle the first two hardest climate areas,” he says. “Then from there, we have global scale—rural India, sub-Saharan Africa, where we know the population is going to increase and be moving to the middle class. If everybody in India and Africa wants the same kind of suburbs that we’ve been building so far, the planet’s not going to make it.”

By using the most advanced methods for growing food—a combination of aeroponics, aquaponics, permaculture, food forests, and high-yield organic farming—the neighborhood will grow many times more food than a traditional farm of the same size, with fewer resources.

The company also has projects planned in Sweden, Norway, Denmark, and Germany.