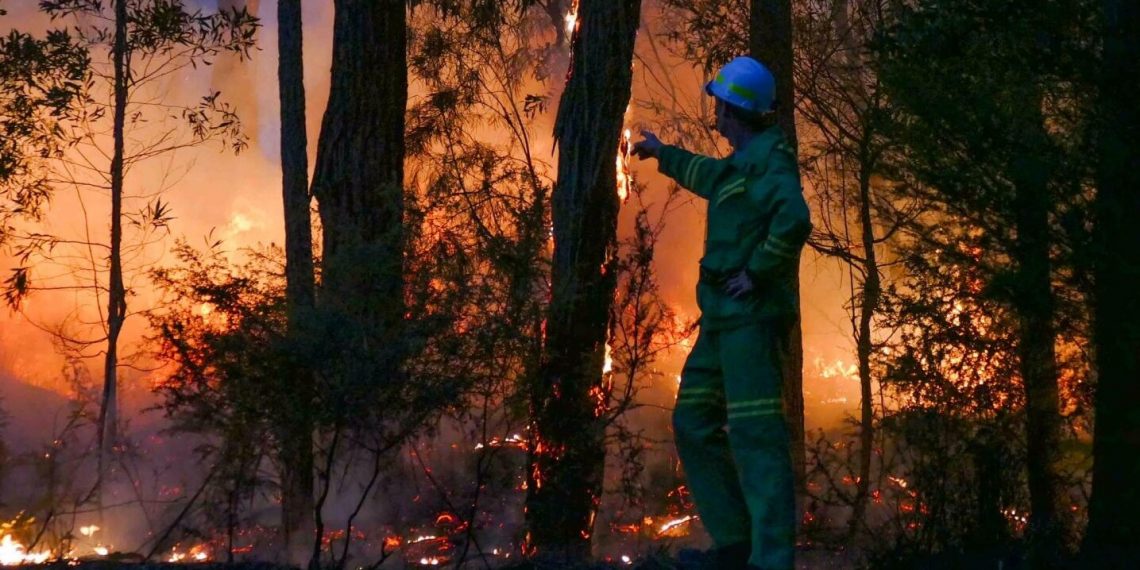 Geographer Stefan Doerr monitors a controlled fire as part of research into wildfires.

Scientists have been warning that wildfires could be exacerbated by global warming, but new research indicates that this is not an immediate threat.

LONDON, 29 May, 2016 – Despite extremes of heat, extended drought and greater hazards from human carelessness, wildfire is not on the increase.

Two separate studies, in two journals, using different ways to assess the evidence, conclude that the area of scrub, forest or grassland burned to cinders every year is more or less the same, or may even be getting smaller.

This finding is counter-intuitive: other researchers have warned – and warned more than once – that global warming could exacerbate the conditions for wildifire, the damage caused by them, and perhaps their intensity.

And both sets of researchers began to arrive at their similar conclusions as the news media reported blazes that smouldered in California, Indonesia and Canada.

Stefan Doerr and Cristina Santin, geographers at Swansea University, Wales, report in the Philosophical Transactions of the Royal Society B that they looked at records of charcoal in sediments and isotope evidence in ice cores to make an estimate of the changing patterns over the last 40 years or so – and, indeed, the more distant past.

They did not find evidence that global warming has – at least, for the moment – started to set the world alight.

“Instead, global area burned appears to have overall declined over past decades, and there is increasing evidence that there is less fire in the global landscape today than centuries ago,” they conclude.

They also look at the historical evidence for the dangers of wildfire. Between 1901 and 1914, floods claimed 7 million lives and earthquakes 2.5 million, but wildfires, killed only 3,753, according to the UN’s disaster database.

“In large parts of the world, the total area burned did not increase but decrease in the last century”

The two scientists calculate that around 4% of the world’s land surface is charred by fire every year. They point out that some landscapes are adapted to periodic fire, and burning itself is a natural part of the ecosystem.

They do not claim that fire will not become an increasing hazard. Humans are changing the natural landscape, and that creates its own dangers.

“The warming climate, which is predicted to result in more severe fire weather in many regions of the globe in this century, will probably contribute further to both perceived and actual risks to lives, health and infrastructure,” they write.

Almut Arneth, a scientist at the Karlsruhe Institute of Technology, and colleagues report in Nature Climate Change that wildfires worldwide devastate an area the size of India every year. The scientists – from Sweden and the US, as well as Germany – used satellite imagery and computer simulations and came to much the same conclusion: wildfire may be an increasing danger, but not yet.

“So far, we have thought that climate change increases the number of wildfires,” Professor Arneth says. “In large parts of the world, the total area burned did not increase but decrease in the last century.”

The resolution of this paradox could lie in population growth: humans in ever greater numbers are colonising, exploiting and fragmenting the forests and scrublands that might otherwise periodically burn. The number of fires may decrease as population density increases.

“In the future warmer and frequently drier world, the risk of fires will further increase,” Professor Arneth says. “This increases the risk of damage to people.” – Climate News Network

IKEA Will Be Net Renewables Exporter by 2020 (Some Assembly Required)