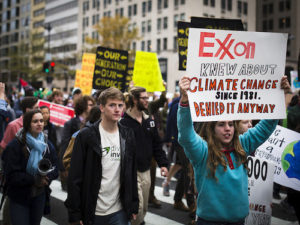 Although climate organizers didn’t get all they were looking for from Exxon’s annual meeting this week, shareholders “approved a measure to let minority shareholders nominate outsiders for seats on the board, meaning a climate activist could eventually become a director at the world’s largest publicly traded oil company,” Reuters reports.

While the Exxon board opposed the measure, it earned support from more than 60% of shareholders, sponsored by New York City Comptroller Scott Stringer. “If this company is to properly address fundamental long-term risks like climate change, its board of directors must be diverse, independent, and accountable,” Stinger said in a joint statement signed with the California Public Employees’ Retirement System (CALPERS). Exxon CEO Rex Tillerson said the board would take up the measure at its July meeting.

“This year’s meetings were arguably the tensest ever, coming on the heels of the Paris accord to curb fossil fuel emissions and as New York’s attorney general investigates allegations from environmentalists that Exxon misled the public about climate change risks,” Reuters notes. “Exxon has denied this and complained of being unfairly targeted.”

ThinkProgress reports that AGM participants rejected resolutions calling on the company to develop policy to avoid 2°C average global warming, increase capital distributions as an alternative to investing in stranded assets, and disclose the impact of global climate policies on its bottom line.

“We know the path that Exxon is on, and the business strategy as it exists today, and as it existed for the last 50 years, is not a business strategy that is going to work in the 21st century,” Natasha Lamb of Arjuna Capital told TP’s Samantha Page afterwards. “It is not in line with a low-carbon scenario where we limit the burning of fossil fuels.”

ThinkProgress and Grist both had Tillerson acknowledging that climate risks are serious and “warrant thoughtful action,” claiming that “relative to the understand of the science, there’s no space between us and the IPCC.”

Despite the limited success with formal resolutions, Grist reports that the meeting was “totally overrun by climate demands,” adding that “it’s impossible for fossil fuel executives to get some damn peace and quiet.” One of the voices at the meeting was the granddaughter of James Black, the first scientist to warn Exxon of the risks of climate change in 1977.

“When my father first briefed Exxon’s executives about climate change, the concentration of carbon dioxide in the atmosphere stood at 330 parts per million,” Black’s daughter, Claudia Black-Kalinsky, writes in The Guardian. “Now it is 20% higher, and NASA scientists are telling us the first few months of 2016 are so warm we’re almost certain to set another global heat record this year.”

She adds that “we’ll never really know what would have happened if Exxon had listened to my father.” But even today, “Exxon’s engineering and research capacities could help create a future in which the planet is protected, public welfare is not compromised, and the price of its shares will remain high. That’s what my father wanted. As his daughter and a shareholder, it’s what I want, too.”