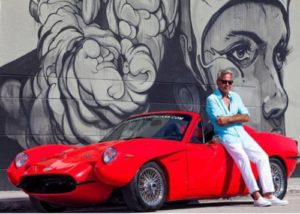 A former Dell sales manager has created what self-styled “cannabis culture” magazine Civilized describes as “your standard, cherry-red, curvy midlife crisis-mobile” sporting a body made out of roughly 45 kilograms of woven hemp instead of steel or fibreglass.

The US$200,000 custom sports car’s curves are molded from three plies of plant material over a Mazda chassis, producing bodywork that is “10 times more dent resistant than steel,” says Michael Dietzen, who imported the fabric for his project from China because hemp—cannabis—is illegal to grow in his home state of Florida.

The car also runs on biofuel. “We may not be able to pull up [to] our local gas stations right now and say, ‘Fill it up with hemp gasoline,’ because we have to wait for these fuel companies to catch up and start doing the right thing,” Dietzen said. But “it lets people know that we can make everything out of plants.”

The former tech sector manager says he was inspired by reading accounts that Henry Ford had constructed a car of hemp fibre stiffened with resin, running on ethanol made from hemp.

Dietzen’s car has a name—the Renew—but he admits it’s mostly a “symbolic product” at the moment, and not destined for mass production.