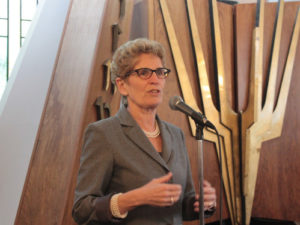 The leaked draft of Ontario’s draft climate plan shows that the province “appears to be asking the right question: how do we replace fossil fuels as an energy source by mid-century?” Greenpeace Canada climate campaigner Keith Brooks wrote in a National Observer opinion piece last week.

And in carving out an honest response to the climate crisis, rather than “looking for the path of least political resistance,” the government of Premier Kathleen Wynne is willingly “taking heat from some very powerful lobbies (Big Oil, Big Auto, and real estate developers, to name a few) for doing things whose benefits won’t be realized until well after the next election.”

That kind of political courage is rare, Stewart says, and that’s unfortunate. “Our challenge is that modest reductions in emissions will still be even more disruptive, via skyrocketing levels of climate change-fueled disasters like floods, droughts, wildfires, and rising sea levels. So given that we have to choose between climate action and suffering, I suggest we opt for the former.”

In Edmonton yesterday, Wynne appeared to walk back the province’s commitment to phase out natural gas heat, following criticism from Alberta Premier Rachel Notley and Enbridge Inc. CEO Al Monaco. “Let me be clear,” she said. “We are not banning natural gas and have no intention to force people off natural gas.”

Brooks says Ontario’s draft plan isn’t perfect, and its success will depend on the implementation details. “But it does begin to tackle the question of how to phase out fossil fuels,” he notes. That’s a tough challenge that the Wynne government deserves kudos for confronting, since “much of our existing infrastructure was built for fossil fuels. We need governments to change the rules around building codes, urban planning, and transportation systems so that all new infrastructure is built in a way that enables ordinary people to live, work, and travel without frying the planet.”

In a report this week, meanwhile, Toronto-based Environmental Defence traces the success of Ontario’s 2009 Green Energy and Green Economy Act, which set out to build a homegrown renewable energy manufacturing sector by producing more of the province’s electricity from technologies like solar and wind.

“Today, Ontario leads Canada in renewable energy investment, development, and employment,” ED writes. “And support for green energy in the province is strong. A recent poll shows more than 80% want to see more power in Ontario generated from renewable sources.”

Noting that the province’s Long-Term Energy Plan makes no provision for renewable energy development beyond 2021, Environmental Defence has launched a petition calling on Energy Minister Bob Chiarelli for a longer-term commitment.