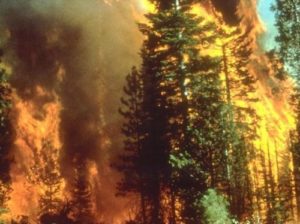 Add to Canada’s challenges in meeting its carbon-cutting goals the problem of making up for the 40 to 85 million tons of carbon dioxide-equivalent (CO2e) of mixed greenhouse gasses released by the Fort McMurray wildfire.

Noting that the wildfire ranks among the six or seven largest in Canada since satellite observations began in 1970, the Washington Post consulted experts to estimate how much CO2 and other climate-changing gases are being carried into the atmosphere on the flames.

Werner Kurz, who heads the carbon accounting team at the Canadian Forest Service, told the paper he “generally estimates” that each hectare of burned forest land releases 170 tons of CO2-equivalent emissions. Using the fire’s reported extent last Friday of 500,000 hectares, that worked out to some 85 million tons of CO2e—more than 10% of Canada’s greenhouse gas emissions in 2014, the last year for which an official estimate (of 732 megatonnes) exists.

The University of Alberta’s Mike Flannigan suggested that even Kurz’s higher figure might be low, depending on how deeply the intense blaze burned into the boreal forest soil.

Applying Kurz’s 170 tons-per-hectare metric to the fire’s latest published surveyed extent on Sunday of 525,390 hectares, his mid-range estimate increases to 89 Mt—and climbing, as the fire nicknamed “The Beast” continues to consume boreal forest in Alberta and Saskatchewan.

Experts said the wildfire may burn and continue releasing megatonnes of climate-changing gases for weeks to come.