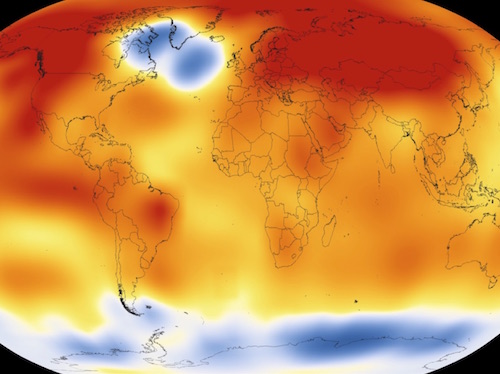 With the planet simmering—and some regions searing—in a string of record hot months in what is likely to the hottest year on record, humanity’s emissions of climate-heating gases are increasing at an accelerating rate, the U.S. National Oceanic and Atmospheric Administration reports.

“We’re dialing up Earth’s thermostat in a way that will lock more heat into the ocean and atmosphere for thousands of years,” warned Jim Butler, director of NOAA’s global greenhouse gas monitoring division. “This isn’t a model. These are precise and accurate measurements, and they tell us how humans are changing the balance of heat in the Earth system.”

Since 1990, the higher concentration of CO2 in the atmosphere has had the effect of increasing its direct warming effect on the climate by 50%, InsideClimate News writes.

Meanwhile levels of methane, a less persistent but far more potent greenhouse gas, jumped by 11 parts per billion from 2014 to 2015, nearly twice as fast as their average annual increase from 2007 to 2013.

Because of lag effects, last year’s record increase in greenhouse concentrations will not be felt in climate changes for years. Or, to put it another way, several more decades of warming beyond the latest hot streak are already “baked into” the climate forecast by earlier emissions, before we experience the full consequences of those humanity released in 2015.

“This inventory shows no sign that the planet as a whole has the problem under control,” commented Kevin Trenberth, senior scientist at the National Center for Atmospheric Research.

Atmospheric CO2 concentrations vary in the course of the year. But earlier this month, several observatories reported that levels would permanently exceed 400 ppm this year.