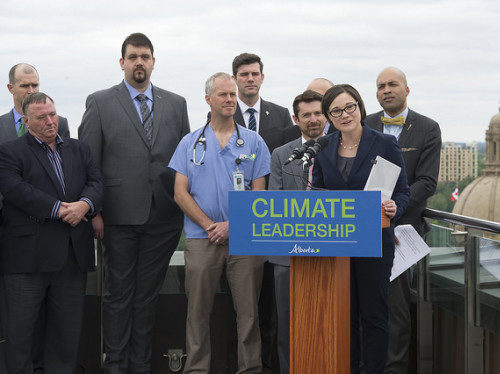 Three weeks after an explosive wildfire forced more than 80,000 people from their homes in Fort McMurray, the province of Alberta tabled legislation implementing its plan to tackle its rising carbon emissions.

Environment Minister Shannon Phillips introduced two new bills in the provincial legislature Tuesday, six months after Premier Rachel Notley unveiled the key elements of the provincial strategy, including a lifetime cap on tar sands/oil sands emissions, an early phaseout of coal-fired power, and increasing the share of Alberta’s electricity provided by renewable sources from under 10% to 30% by 2030.

Phillips’ Bill 20, the Climate Leadership Act, “gives the government the authority to establish the carbon levy and consumer rebates,” the Edmonton Journal reports, while the Energy Efficiency Alberta Act establishes a new, $170-million agency to drive efficiency in the Alberta economy.

New carbon levies on gasoline, natural gas, and diesel fuel will kick in at the beginning of 2017 and increase again on January 1, 2018—adding 6.7¢ to the price of a litre of gasoline, 8¢ to a litre of diesel, and $1.52 to the cost of a gigajoule of natural gas. Large industrial greenhouse emitters will see a current $15-per-ton carbon tax double to $30 at the beginning of 2017.

The new taxes will cost the typical Alberta family between $70 and $105 extra per year, Phillips estimated.

“These are estimates of indirect costs, but what they show is they are relatively minor in the Alberta economy,” Phillips said Tuesday. “It’s also important to note they don’t take into account input costs that manufacturers may reduce, given energy efficiency programming or changes in the way they undertake their industrial processes. A price on carbon is intended to drive both of those things.”

The new legislation exempts the energy-intensive farm sector and provides for rebates to low- and middle-income households to offset their added costs. The province also intends to direct some of the estimated $6 billion it will receive in new carbon tax revenues to investments in public transit and clean energy.

Meanwhile, evacuees from Fort McMurray began to plan for their return. The government announced that with the restoration of electricity to 90% of the community, a “voluntary, phased re-entry” of residents would begin on June 1—a full month after the flight from the city. Plans for re-occupation were advanced after rain and cooler weather dampened the wildfire somewhat. Nonetheless, it remained out of control over an area of some 522,900 hectares in Alberta and another 2,500 in neighbouring Saskatchewan.

Tar sands/oil sands facilities that had been evacuated last week were also preparing to resume production. The BBC, citing an analysis by the Conference Board of Canada, estimated the shutdown was likely to cost producers nearly $1 billion in lost revenue.