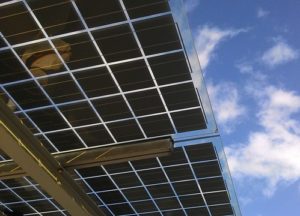 Solar companies should be wary about forming alliances with oil and gas companies, UK entrepreneur and solar pioneer Jeremy Leggett warns in a blog post published earlier this month.

“Oil and gas companies are professing that the natural gas and solar industries should be partners, working together supposedly to mutual benefit,” Leggett writes. “It is a strategy that should be avoided by all solar companies able to do so—which is to say all those not owned by oil and gas companies—as long as the oil and gas industry pursues its current goal of growing gas use for decades to come.”

Leggett bases his advice on two realities: the arithmetic of greenhouse gas emissions and the extent of methane leakage from fracking and other natural gas operations.

The Paris Agreement is Leggett’s touchstone on future emission scenarios, with its goal of keeping average global warming “well below” a 2°C threshold. “There is no room for anything except a managed retreat from gas; yet oil and gas companies claim that society will still be mostly dependent on growing supplies several decades from now,” he writes. “Make no mistake, this is the future most oil and gas companies are lobbying for, as things stand.”

The companies’ central argument is that natural gas releases less carbon per unit burned than coal, but that calculation ignores the emissions of methane, a potent greenhouse gas, from natural gas wells. “If as little as 2% leaks before it is burned, gas is as bad as coal in global warming terms,” Leggett writes. And “as long ago as 2011, scientists from Cornell University estimated that gas leakage from a U.S. shale well could be 7.9% over its lifetime.”

All of which makes the fossil industry an unsuitable partner for solar entrepreneurs, he notes, particularly in light of “the demonstrably malign nature of much oil and gas lobbying.”